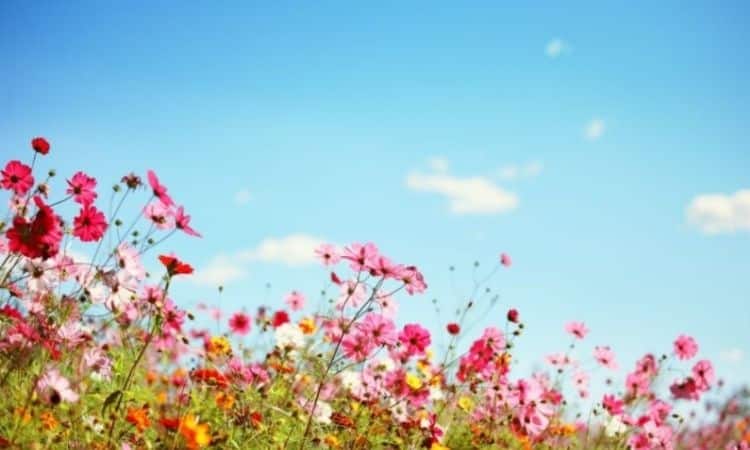 Slowly it is getting warmer and the new garden season is just around the corner. With these ten summer flowers, you can fully enjoy the warm season. Summer literally demands magnificent blossoms and thus conjures the garden into a real paradise. But the flower splendor does not only look pretty but exudes pleasant smells, which also attracts many helpful insects. But which flowers are the ideal companions for the summer?

To make your garden a real flower dream during the summer months, we have collected the best summer flowers for you below.

When Common Daisies transform the lawn into a white-pink sea of flowers, nobody can resist their charm. Common Daisies begin to bloom as soon as it gets warmer and winter fades away. And they only stop blooming when the cold season returns. They grow everywhere and always and even breathe summer joy into a much-mowed garden lawn.

Their long flowering period and their tolerance of pruning make them important plants for pollinators when not much is flowering otherwise. Since their flowers are edible, they are not only suitable in small bouquets on the table, but also for decorating salads. 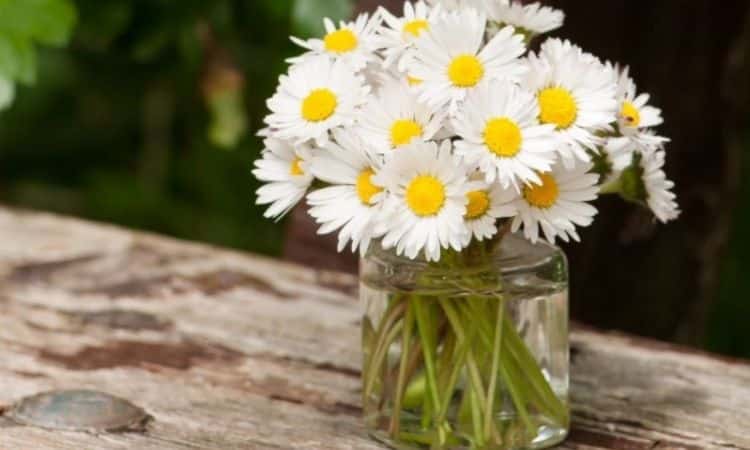 The snapdragons score especially with their colorfulness. They also have a long flowering period: from June to September. You can either prefer snapdragons indoors or in April you can plant them directly in your garden as a colorful mixture. You can also use them as a cut flower to bring the summer into your house. Children especially love this plant because of its unusual flower shape, which has earned it the name snapdragon. 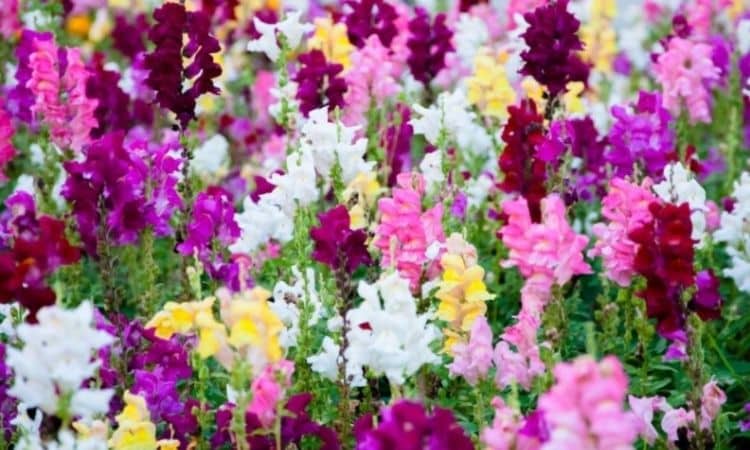 Probably the epitome of summer is the common sunflower with its bright yellow color. It always looks good, whether as a small variation in a pot on the terrace or as a two-meter tall specimen on the garden fence.

A special characteristic of the plants was already observed by the ancient Greeks: The leaves and buds of the sunflower follow the course of the sun during the day. This behavior is called heliotropism. When the sunflowers have faded, the resulting seeds form a rich food source for birds. 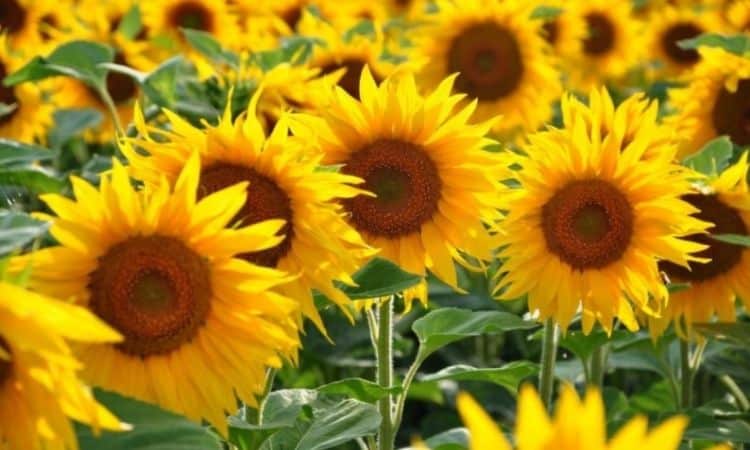 Mallow flower canes, also known as hollyhocks, can grow between one and three meters high. Their beautiful large flowers along the thick trunk fit perfectly in farm gardens. Hollyhocks are perennial, but only form a rosette in the first year and only in the second year does the upright stem follow. Once they are established, they often sow themselves. There is an unbelievable abundance of flower colors – starting with white and pale pink, the range extends to deep red and almost black. 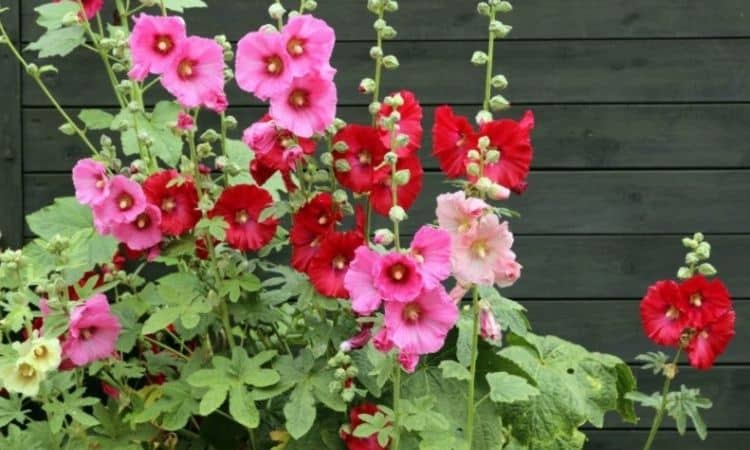 In blue, the color of fidelity, the delicate Scorpion grasses blossoms. This robust herb quickly spreads everywhere and adds a touch of blue to your garden. It prefers sunny to semi-shady places and is a pretty ground cover. Planted in clumps in a basket or pot, it is also very decorative outside the bed. 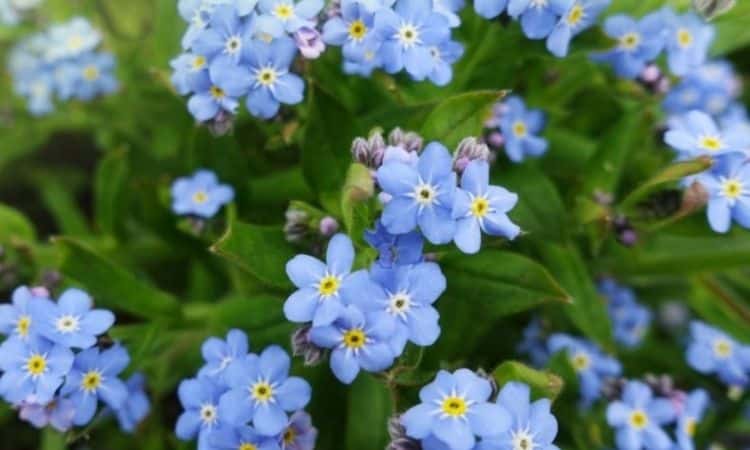 The Dahlia is the star among the summer flowers. Its magnificent flowers are the pride and joy of many a hobby gardener. Originally the dahlias come from Central and South America and first came to Europe in 1789, where they soon met with great enthusiasm.

In addition to the introduced varieties, new color variations were created by crossbreeding and so today there is a huge spectrum of colors available. Dahlias are perennials and can also be kept in pots and pails. However, it is important to dig out the rhizome, which survives the winter, in autumn after the above-ground parts of the plant have died and to hibernate in a dark and cool place. 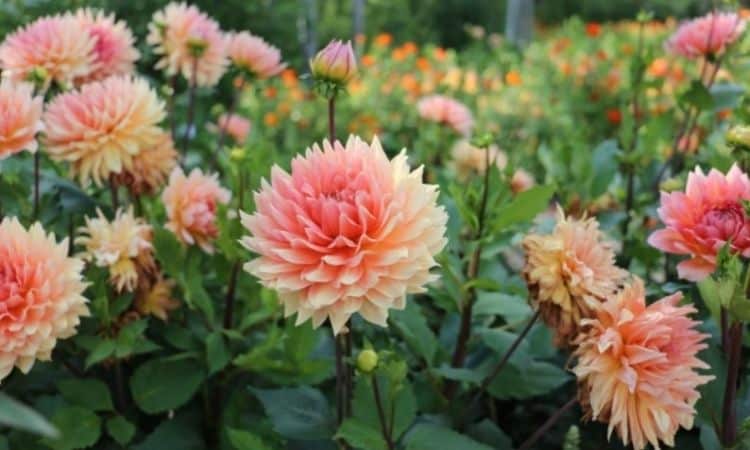 Bright red, orange, or yellow brings the nasturtium into the garden. The fleshy plant grows either creeping along the ground or, if possible, climbing up fences or trellises. It also has a good effect on the raised bed, from which it seems to pour out as soon as it is large enough. The plant is annual and loves the sun. Its leaves, flowers, and buds are edible and taste like cress. Dishes and salads can be decorated with pretty flowers and the buds are good for pickles. 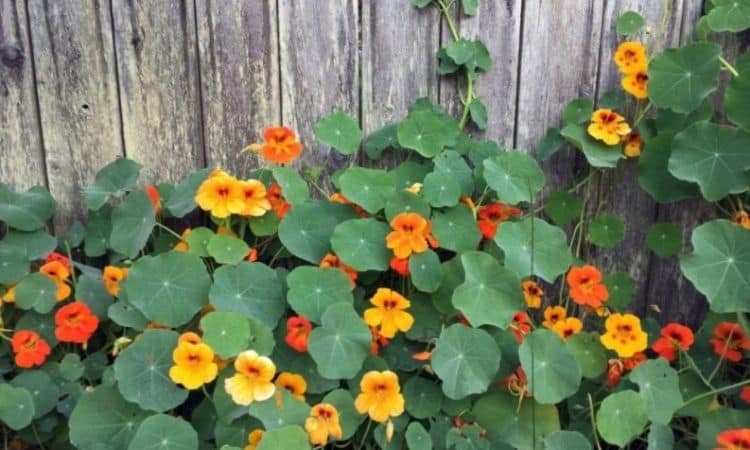 The borage with its small blue flowers is somewhat prickly and hairy. When mixed with marigolds, however, it unfolds its full charm and is particularly well interspersed between vegetable beds. Its flowering time is long and goes from May to September. Borage is a medicinal and spice plant and is also known as a cucumber herb. Its leaves can be mixed well in salads. A little tip: freeze the small flowers in ice cubes and enjoy them in a cool drink on a hot summer day.

🌺 Similar Post |  What Is The Shelf Life Of Lawn Seeds? Test With Germ Sample 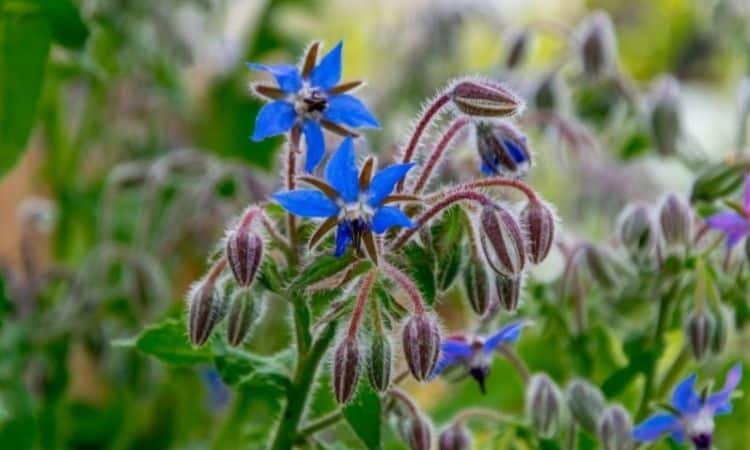 Garden Phlox is a typical plant in farmer’s gardens but is also very well suited for use in purely ornamental gardens. With a height of up to 130 centimeters, it can be excellently combined with somewhat lower plants such as the yellow coneflower. As a location, it prefers a half-shaded and not too dry place. Stauden-Phlox is available in a wide variety of colors, from pure white to pink and deep red. Its flowers smell of summer lightness, which makes them a beautiful component in bouquets. 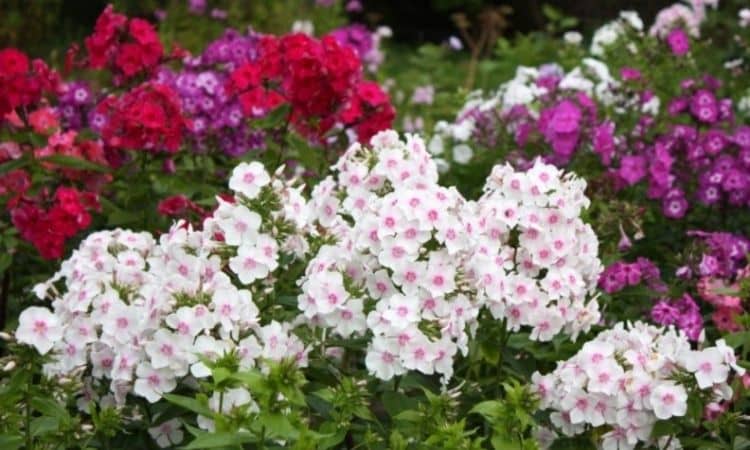 The yellow coneflower is just as summery as its name promises. Originally from the east of the USA, this species has wonderfully bright yellow flowers. Especially in combination with the pink to purple flowers of the perennial Phlox, coneflower unfolds its full effect. It thrives in both very sunny and semi-shady locations. As the coneflower reproduces quickly, cuttings can be easily separated. However, if you do not want the plant to spread too much, it is advisable to limit it. This can be achieved, for example, with a simple stainless steel planting ring. 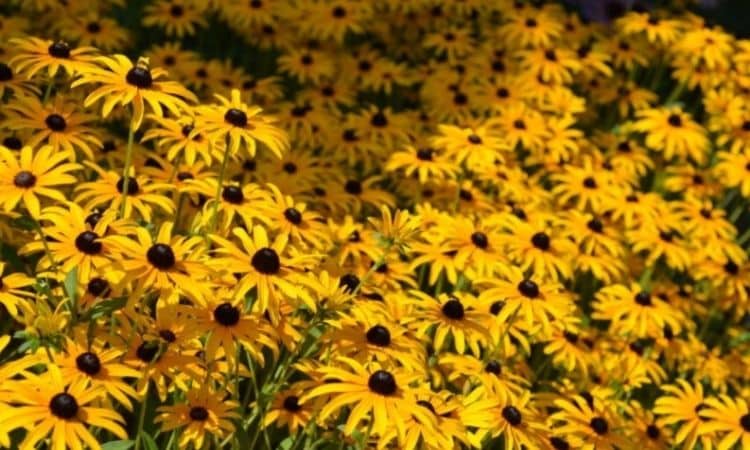 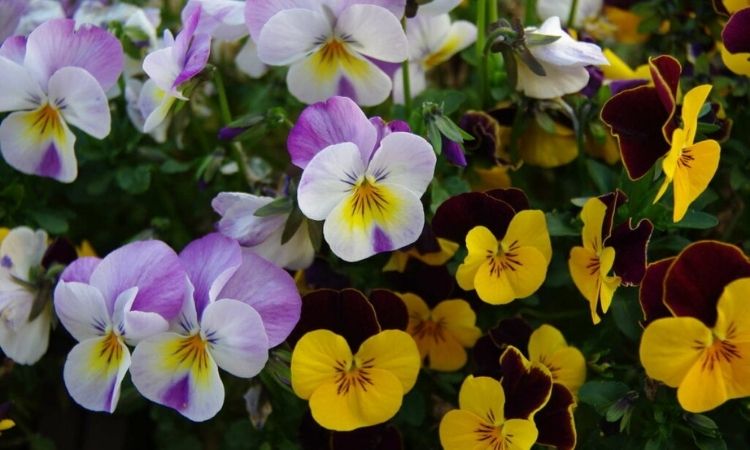 Horned violet can be bought in autumn and spring. How to care for them and what to consider when growing horned violet, you can learn here. Horned violet (Viola cornuta) owes its name to a small horn perched on the end of its flower. These flowers, with their incredible variety of colors, you can also… 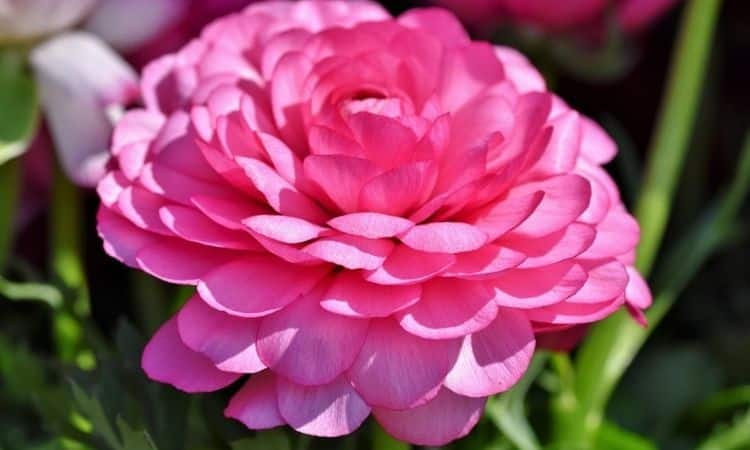 When is the flowering time of the Persian buttercups? What do you have to consider when planting and caring for ranunculus in the garden or on the balcony? We give tips and introduce the most beautiful hardy ranunculus varieties. Ranunculus blossoms in early summer and with its multi-faceted, roundish flowers bring a splash of color… 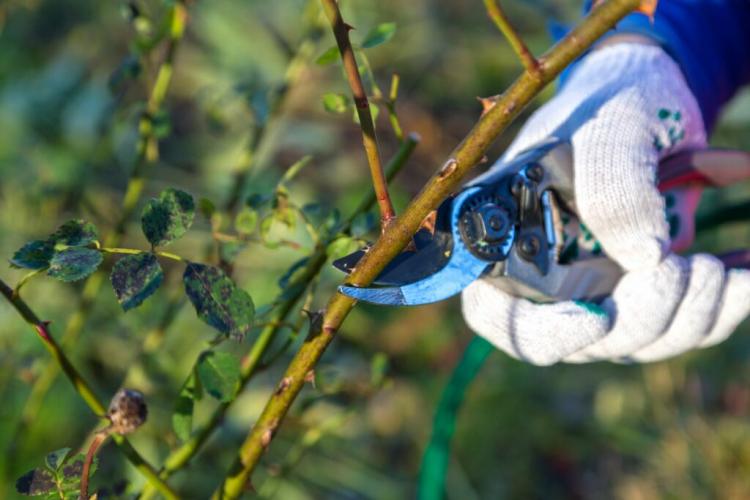 The growth form of bed roses differs significantly from that of other roses. Here you can find out when and how to prune your floribunda correctly. Roses ( Rosa ) are certainly among the most beautiful flowering shrubs in the garden. Ideally, floribunda roses should grow bushy, because shoots that are too long would cause… 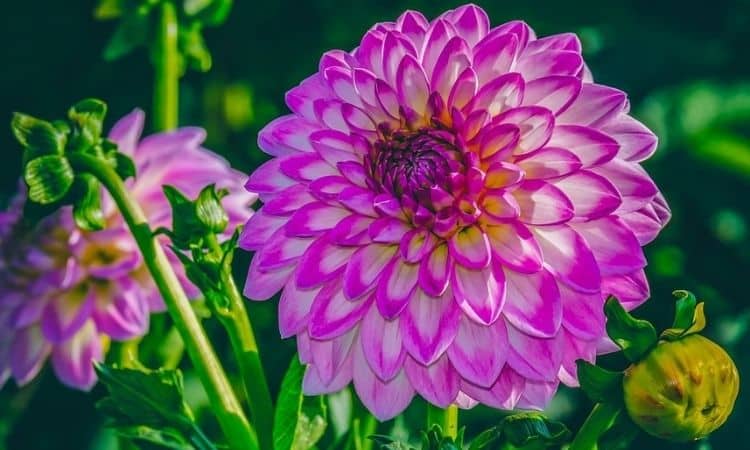 In order for the dahlia to delight us with its beautiful flowers, it needs a few extra nutrients. We show what you should consider when fertilizing dahlias. Originating from South America, dahlias (dahlias) transform your garden into a shining sea of flowers from July until the first frost in autumn. The queen of late summer… 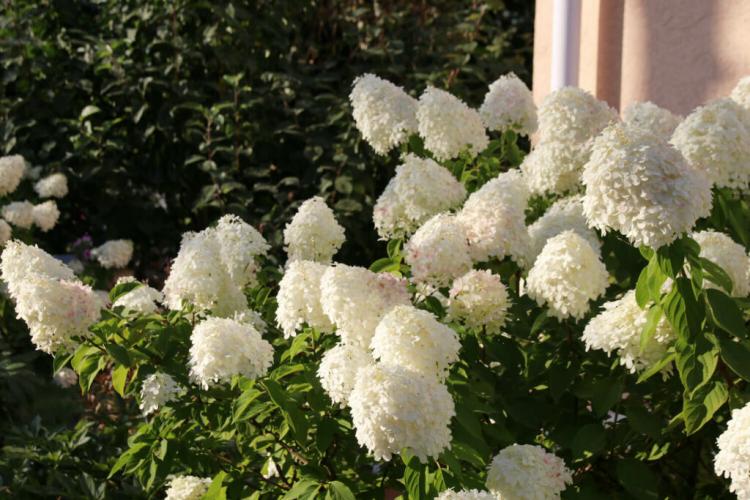 What is the perfect location for panicle hydrangeas? What do you have to consider when fertilizing panicle hydrangeas? Everything about planting and caring for the hydrangea can be found here. Hydrangeas exist in many different types and varieties and have become an indispensable part of our gardens. This is also confirmed by its name –… 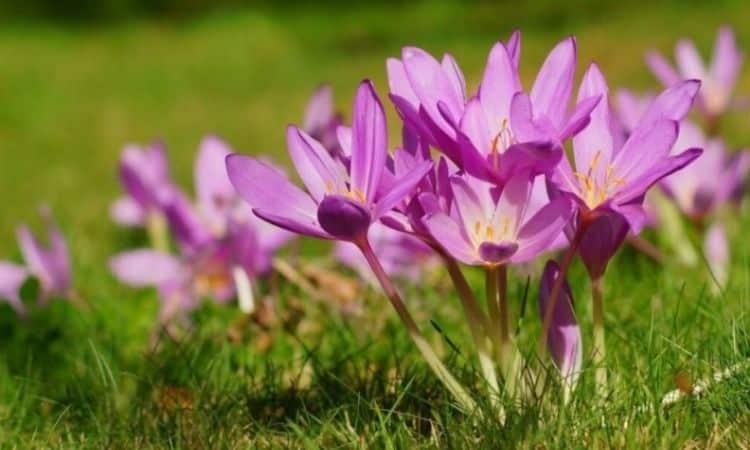 How do you recognize the Autumn Crocus? Is it also suitable for the garden and what do you have to pay attention to with this pretty plant? You can find out everything about the Colchicum Autumnale here. When the first leaves fall in early the Autumn Crocus (Colchicum autumnale) adds color to the landscape. The…