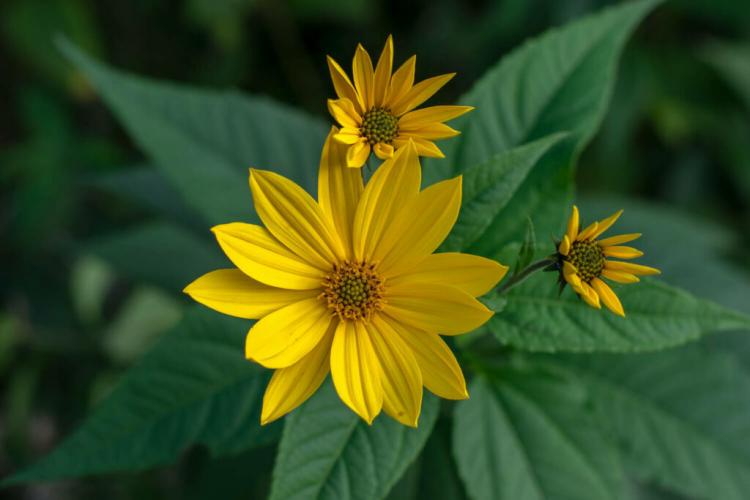 In the 17th century Jerusalem artichoke ( Helianthus tuberosus ), also called Jerusalem artichoke or earth pear, arrived by sea from South America to Europe. Initially, the brown or red tuber, which tastes a bit like the artichoke ( Cynara scolymus ), was reserved for the rich and aristocratic. Later, however, it spread increasingly among the people and was an important staple food for a long time.

Planting Jerusalem artichokes: when is the best time?

The best time to plant Jerusalem artichokes is in spring between the beginning of April and mid-May. Alternatively, the Jerusalem artichoke tubers can be planted in autumn, between late September and early November. The plants do not sprout until the next spring, however, a little earlier than the tubers that were planted from April to May. In contrast to potatoes, Jerusalem artichokes are hardy and can therefore be planted at various times and overwintered outdoors.

Jerusalem artichoke makes no great demands on its location. The tuber thrives best on lighter, loamy-sandy soils, which can maintain the soil moisture after rain or watering. The perennial has a fairly high water requirement and needs a good supply of water for tuber formation. On waterlogged soils, Jerusalem artichokes may grow sparingly or not at all.

The sunflower-like plant prefers places with high light intensity, but the Jerusalem artichoke also tolerates partial shade well. The better the location is adapted to the needs of Jerusalem artichoke, the higher the yields of the tasty tubers. Jerusalem artichoke can always be planted in the crop rotation, but it should not be planted after sunflowers or after itself, as in this case root diseases occur more often and stay longer in the soil. 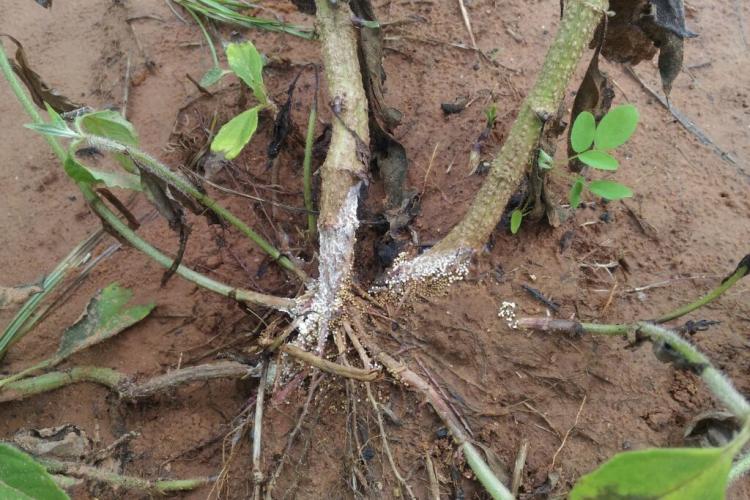 As in any mixed culture, there are good neighbors with Jerusalem artichokes and those that should be avoided. The tubers get along well with climbing cucumbers ( Cucumis sativus ) and French beans ( Phaseolus vulgaris ). On the other hand, Jerusalem artichokes should not be cultivated next to potatoes, because the two plants compete underground.

Tip: Jerusalem artichoke is particularly suitable as a privacy screen, as it can reach a height of over 3 meters depending on the variety. The plants should, however, be protected from the wind or be tied up, as thunderstorms and squalls can easily break off the rigid side branches and sometimes knock over entire plants. 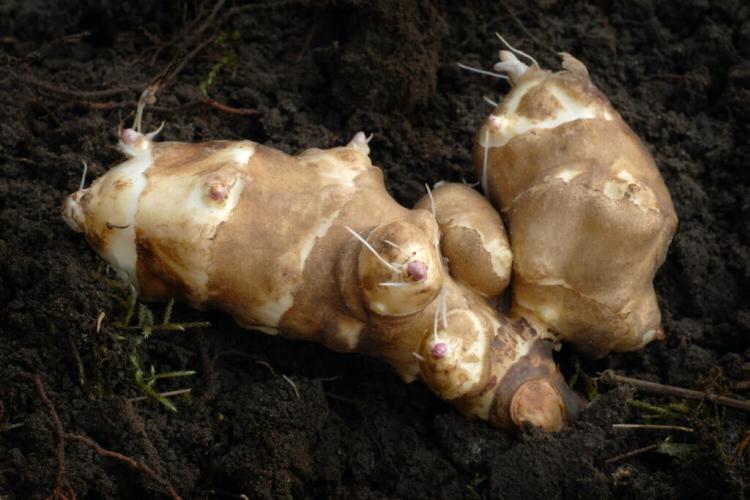 Plant Jerusalem artichokes in a pot

If you don’t have your own garden but have a sunny balcony, you can alternatively plant Jerusalem artichoke in a pot. You should make sure that the bucket is big and deep enough and contains enough soil for the tubers to form. Large window boxes are also suitable if you use dwarf varieties. There are special, low-growing Jerusalem artichokes that are particularly suitable for growing on balconies and patios.

Jerusalem artichoke can also be cultivated in this way in raised beds. To do this, first, fill the planter generously with pre-fertilized potting soil. It already contains important nutrients for Jerusalem artichoke such as potassium and thus supplies the tubers for the first time after planting. The tubers are now placed individually in the earth, lightly pressed, and covered with about 15 cm of earth.

In the pot, Jerusalem artichoke must be watered well not only after planting, but regularly so that tubers form. However, there must be good water drainage so that no waterlogging occurs. After sprouting, a little more soil is piled up and, at best, regularly fertilized organically, the easiest way is with a liquid fertilizer.

Tip: Flowers are not relevant for the formation of tubers, they can easily be removed and then serve as decorative cut flowers. In fact, blossomless Jerusalem artichoke plants may produce more tubers because they do not put any energy into flower development. 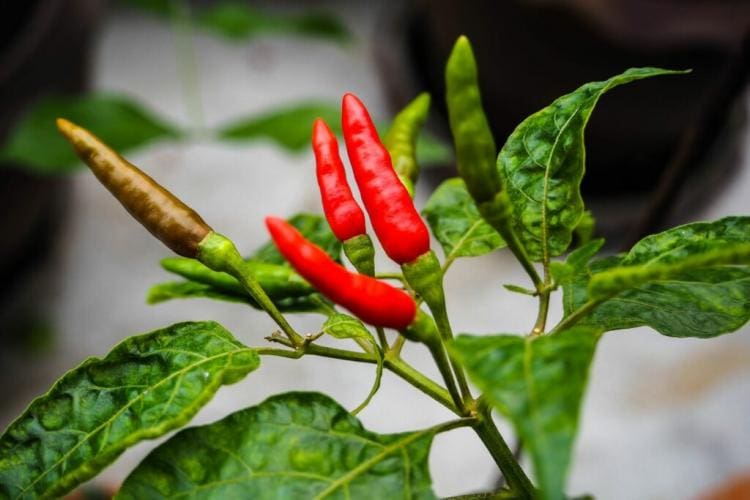 The hot chili comes from hot regions, but can also be grown here. We give tips about planting, caring for, and wintering chili. Gourmets with a green thumb cannot avoid growing their own chilies ( Capsicum ) in the garden. Chilies have been giving dishes the right kick in Asian and Latin American cuisine for… 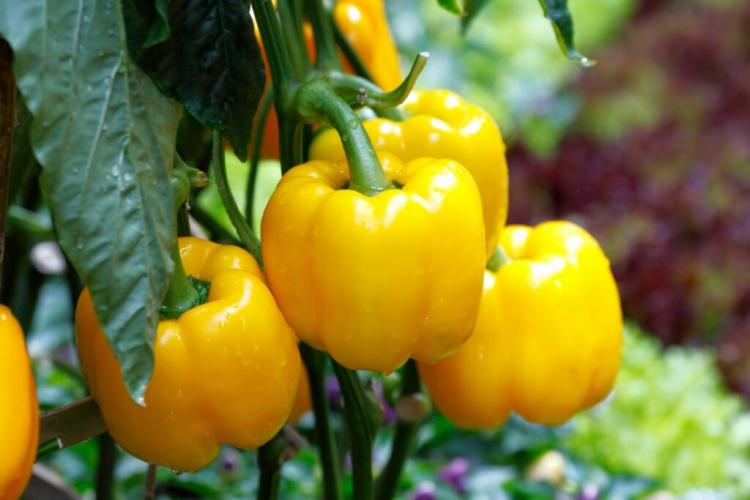 You can also plant heat-loving peppers yourself at home. We will show you what to consider when growing peppers. The bell pepper ( Capsicum ) is a member of the nightshade family ( Solanaceae ) and it is impossible to imagine most kitchens without it. In the vernacular, the colorful vegetable is often referred to… 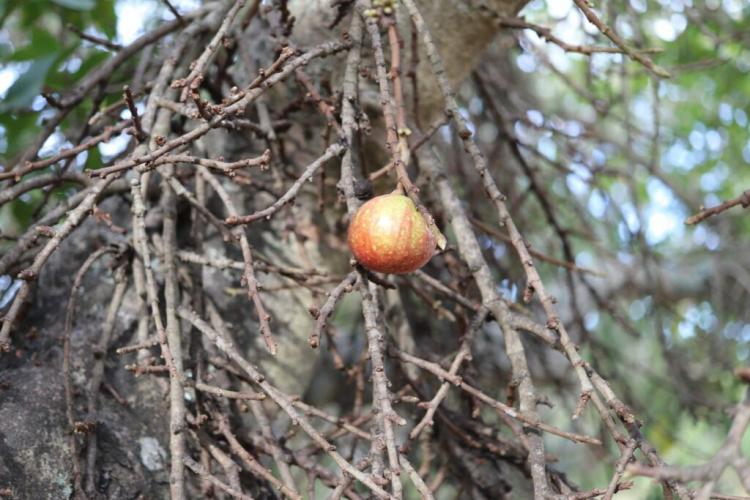 The fig tree is used to the Mediterranean climate, but it can also survive our winters. We show how to successfully overwinter a fig tree. Unlike many other Mediterranean plants such as the olive tree or the oleander, the real fig tree ( Ficus carica ) loses its leaves over the winter. So that it… 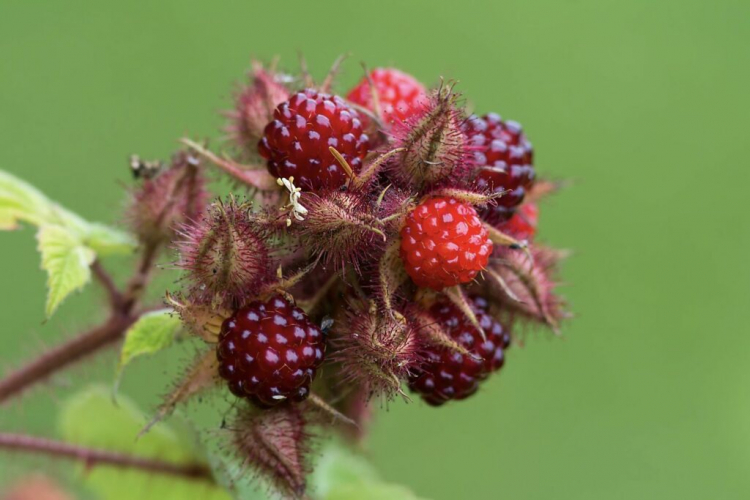 The Japanese Wineberry is closely related to raspberries and blackberries. We introduce the Asian treasure and give tips on cultivation, care, and use. The exotic Japanese Wineberry berries can also be cultivated here despite their Far Eastern origins and bear tasty fruits. In this article, you will learn everything about the choice of variety, cultivation,… 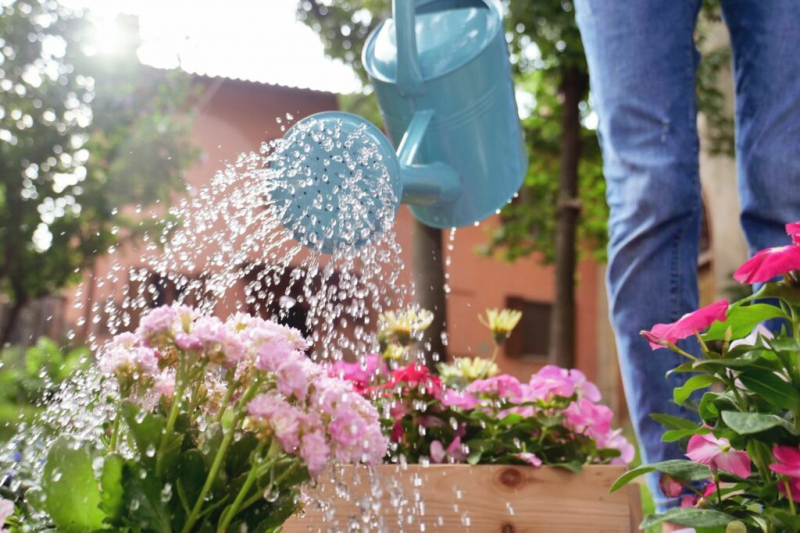 How often should you water flowers? Which plants are watered from above and which from below? We reveal what you should pay attention to when watering plants in your home and garden. There are many myths and half-truths about watering. Although correct watering is essential for a plant to thrive, the watering instructions provided are…