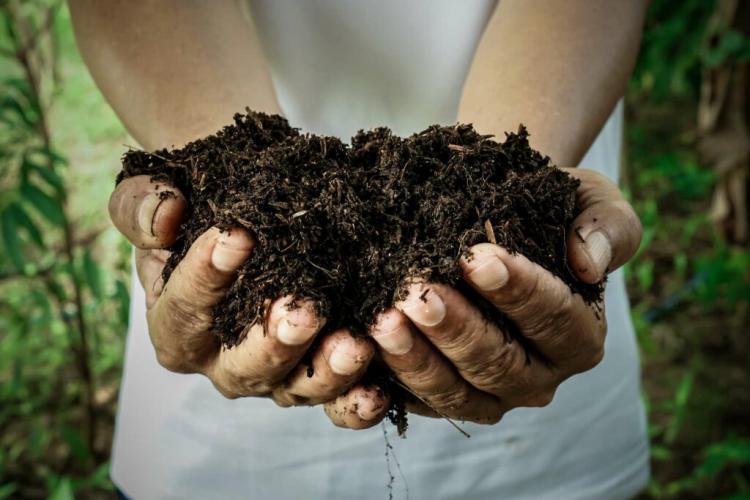 What exactly is humus and how does it affect the plants? You can find these and other answers on the subject of humus here.

Even many experienced gardening enthusiasts wonder what exactly is humus. The answer to this question is actually quite simple: humus is the dead organic matter in our soils. Because of its positive influence on plant growth, it is also referred to by many gardeners as the “black gold of the garden”. In this article, we will go into more detail and explain what humus is and how it is formed.

Humus is the part of the soil that is formed from dead organic matter. Put simply, material that once lived in or on the ground and then died. Not only parts of plants such as leaves or roots, but also the remains of animals, dead insects or fungi, and bacteria contribute to this organic substance in the soil. 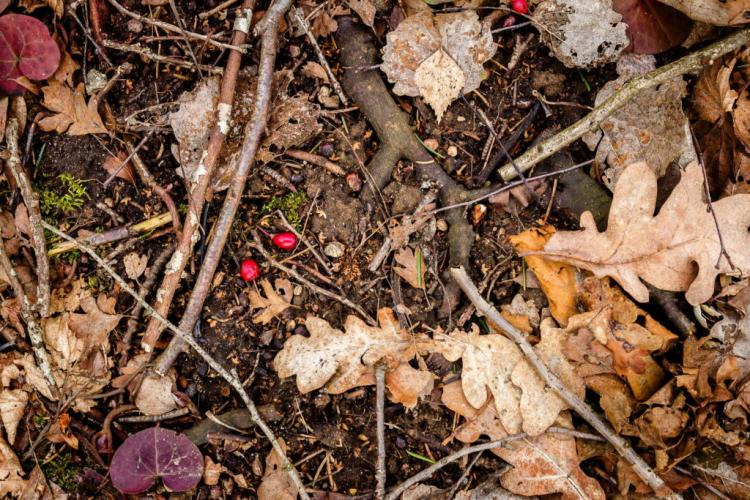 How does humus affect plants?

Humus in the soil is a real miracle cure. Thanks to its stable, crumbly structure, it loosens heavy soil so that plants can take root better in it. In addition, the roots are better ventilated. Light, sandy soils usually store little water. Humus molecules, on the other hand, absorb a lot of water – they literally swell. Consequently, for example, sandy soil with a high humus content can store much more water than equally sandy soil with low humus content. For the hobby gardener, this means: Less watering is necessary. In addition, humus can store nutrients and make them available to the plants. When it is broken down, even more nutrients are released so that your garden soil can even compensate for forgotten fertilizers. 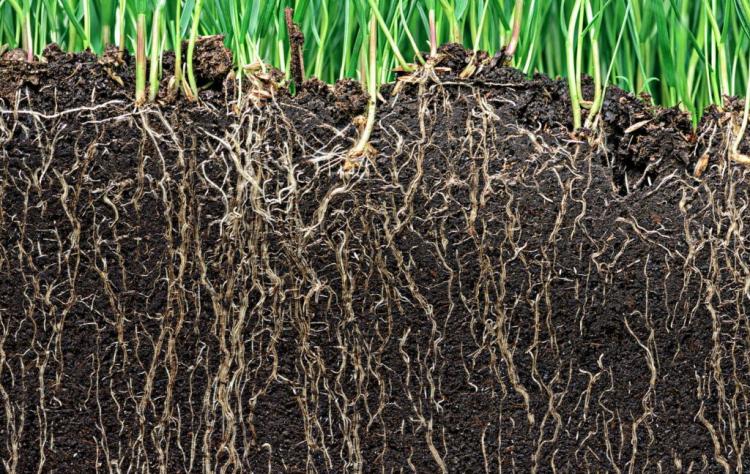 Together with clay, which is also found in many soils, humus forms stable, three-dimensional compounds that prevent your soil from compacting too quickly when you walk or drive over it. Of course, this also benefits your plants, which often do not like it at all when they suffer from waterlogging or lack of oxygen at the roots due to compacted soil.

The dark brown to black color of humus in the soil also heat it faster in spring, so that plants germinate earlier and start growing faster.

Last but not least, a sufficient humus content is essential for healthy soil life. The soil organisms, which often coexist with your plants for mutual benefit, need humus as a basis for life and in return provide nutrients for the garden. 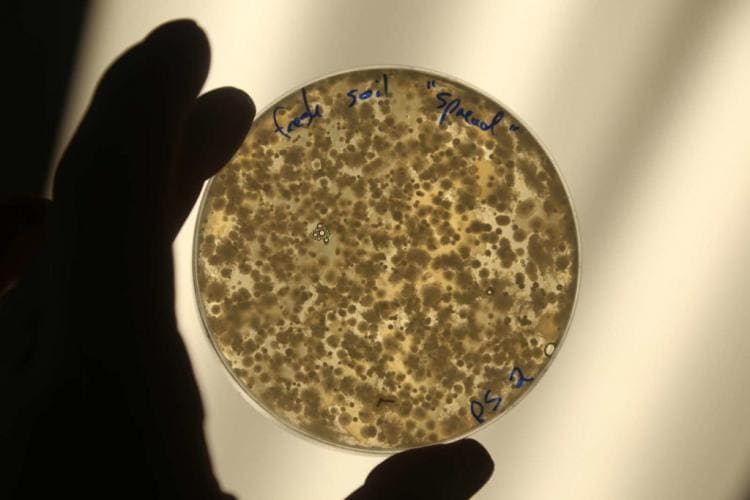 Humus consists of so-called “humic substances”. Depending on the conditions under which it was created, it is composed differently. The process of humification is so complex and the components of humus so different and variable that it has not yet been possible to fully research the underlying process. However, some circumstances are considered certain:

Not only many chemical and biological processes are involved in the formation of humic substances, but also the inhabitants of our soil: earthworms, bacteria, fungi, the smallest insects, and sometimes even supposed pests such as moles or voles. 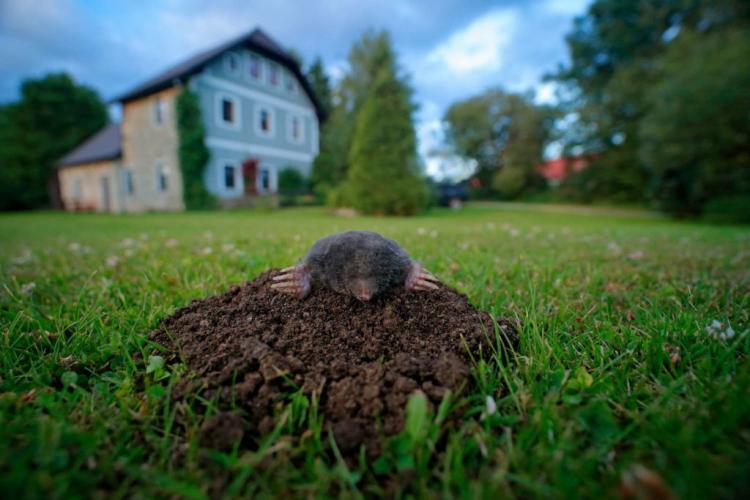 They take the first step of humus formation: they chop up, eat, digest, and transport the dead material that they find in the ground as a kind of “garbage disposal”. After this initial comminution, many humification steps take place without the involvement of soil microorganisms.

Some materials decompose more slowly than others: Sugar or starch, which can also be found in leaf litter or root residues, are easily decomposed and break down more quickly than proteins, for example. The decomposition of pectins, the “glue” between the plant cells, takes a little longer. Cellulose, which forms the cell walls, is broken down even more slowly. After all, it has taken a long time for lignin, the so-called “wood pulp” of microorganisms, to be broken up. This can be seen from the fact that in the forest, in the thick, half-rotted layer of leaves, there are still “leaf skeletons” and small branches that contain a lot of lignin. 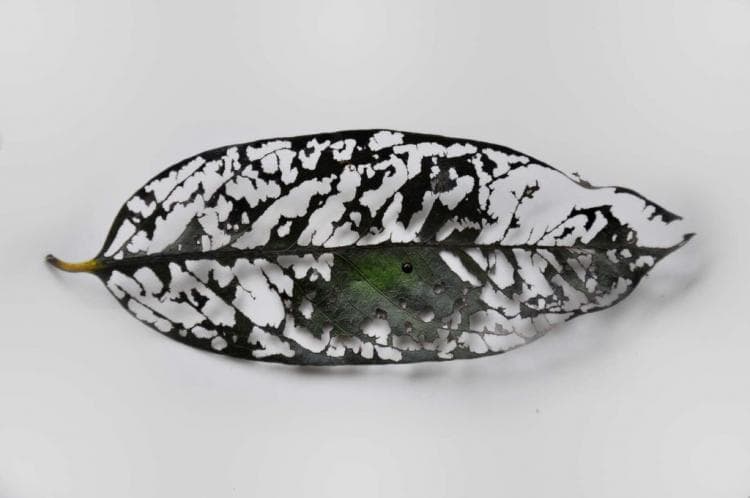 During the breakdown, molecular fragments are repeatedly detached from the decomposing material. These large molecules can change, parts can be split off or more parts can be added. So there are numerous chemical processes taking place. Finally, they can reassemble and form so-called “macromolecules”, which are then called “humic substances”.

It is not possible to create a general chemical formula or an animation of such a humic substance, because its composition is always different. They can only be classified into three groups according to their properties:

Through various processes, including the connection of the resulting humus molecules with charged calcium ions or other soil minerals, the large, visible humus flakes that can be found on a compost heap are created.

Humic substances are in themselves very difficult to break down again. However, a fundamental change in the environmental conditions can also be made possible. 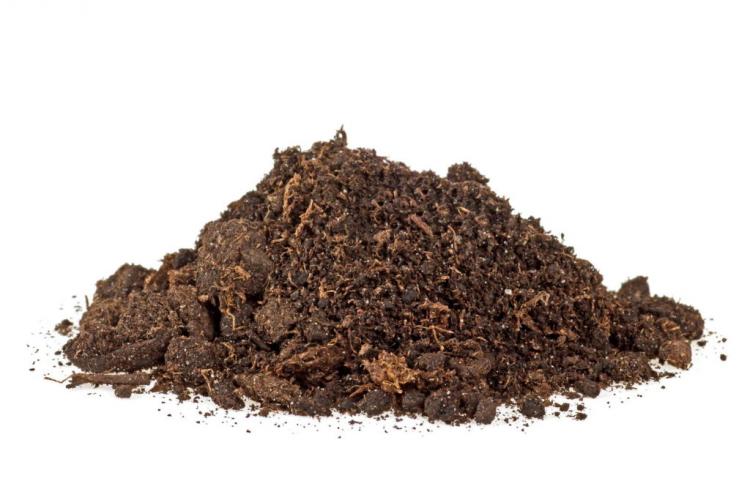 When the organic matter in the soil turns into humus, it is called “humification”. However, all the dead material can also be converted differently, namely by “mineralizing” it.

Put simply, the term “mineralized” means that all these leaves, roots, and dead soil animals are broken down into their individual atomic or molecular parts. Every nutrient that a living being has taken in once in its life and of which it consisted is released again, gets into the soil, and can be used again by other living beings.

The mineralization of organic matter in the soil is carried out entirely by microorganisms living in the soil. They break down the organic matter and partly use it as food. The large organic building blocks practically “disappear” – the carbon escapes as CO2 into the air, minerals pass into the soil solution. 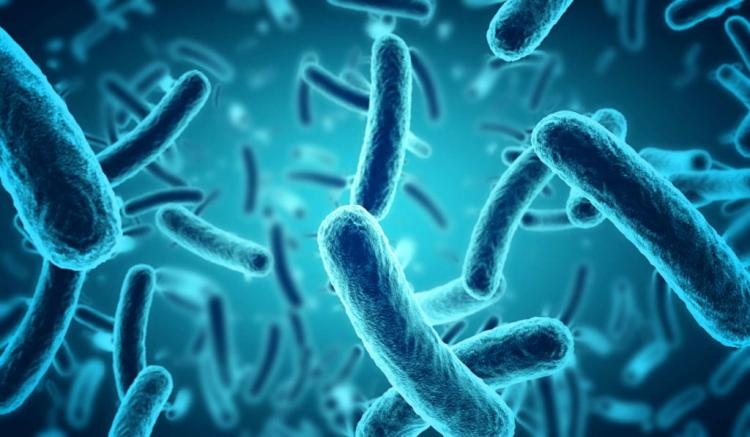 This type of “recycling” is always in cycles in nature and of course saves every hobby gardener a lot of fertilizer, because the minerals released can serve as nutrients for the plants. Of course, when organic material is mineralized, no useful humus is formed and the humus itself can also be broken down by mineralization.

Mineralization is a useful thing because it provides plant nutrients. Humification is just as important because the humus formed improves the soil properties, as can be read in the section above.

We shouldn’t want either one or the other for our soil, our goal is – with sufficient humus content – a balanced ratio. The influencing of this relationship is called the “humus economy”.

It is possible to influence the relationship between humification and mineralization via the amount and type of material added to the soil. In addition, the activity of the organisms living in the soil can also be changed. Depending on the type of soil and the type of cultivation, there are many options for you as the “landowner” to operate a “humus economy” that maintains or even increases your soil humus content. 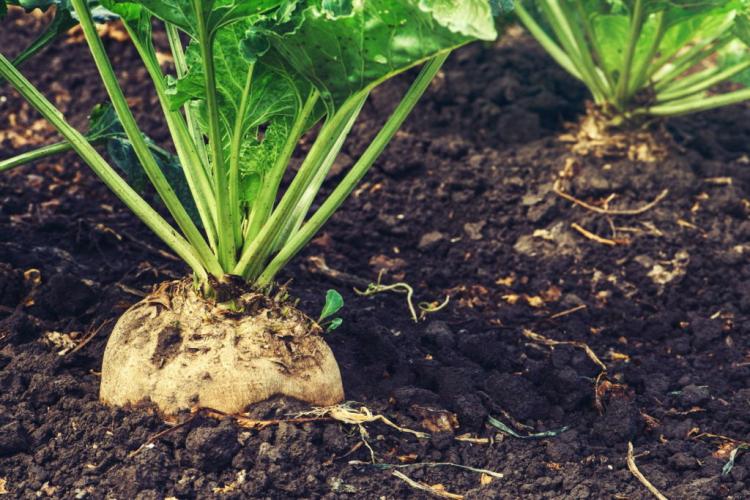 Buy humus: pay attention to this

Humus formation is a long, natural process that requires a lot of patience. If you want things to go a little faster, you can sort of buy humus and distribute it where you need it. In this way you can acquire humus:

Remember that humus is a natural product. In particular, the properties of compost are very variable, depending on the raw materials and rotting conditions. The compost from the recycling center has to move within certain legal limits and the potting soil also meets the manufacturer’s standards.

If you want to keep the humus you just bought, you have to protect it from degradation and further promote the build-up of new humus. To do this, you can use the tips from the article on humus management. 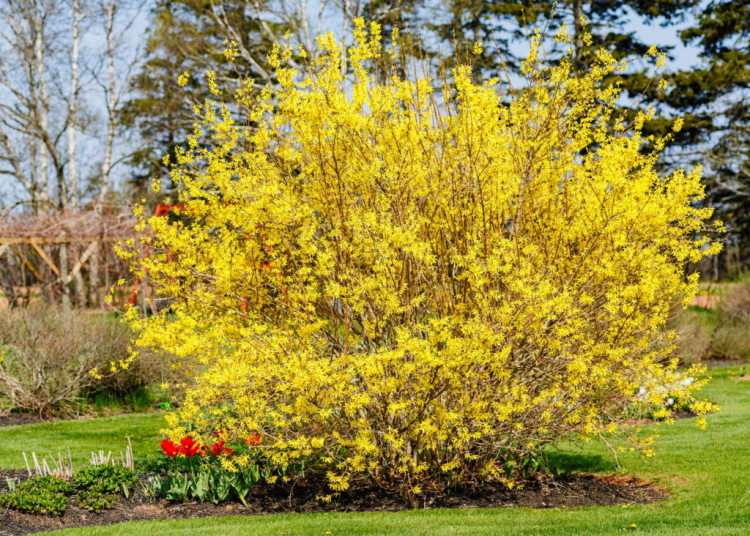 Forsythia already shows their most beautiful side at the beginning of the year. But to be able to marvel at its bloom, you have to be well informed about its requirements. Forsythia is very popular in gardens and parks because the golden-yellow flowering plant is a real eye-catcher in spring. From mid-March, the exotic shrub… 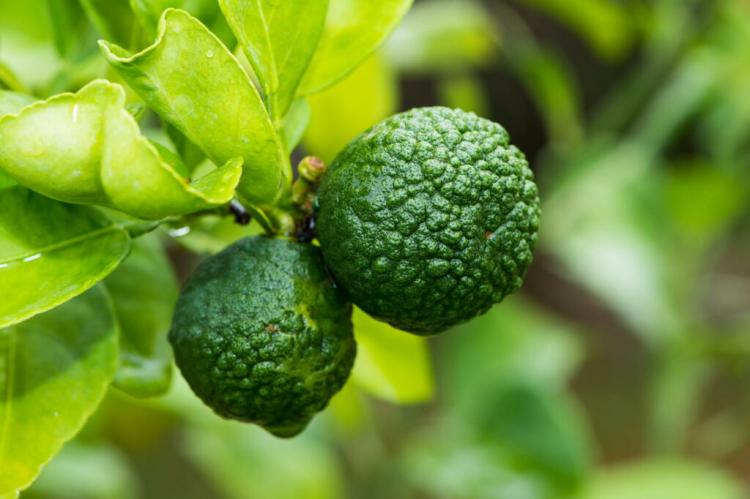 The wrinkled lime variety is on the rise. We show you how to grow and care for the kaffir lime and what the leaves are all about. Some will know the leaves of kaffir lime ( Citrus hystrix ) from recipes for aromatic Thai dishes. The citrus fruit, which is used as a medicinal and… 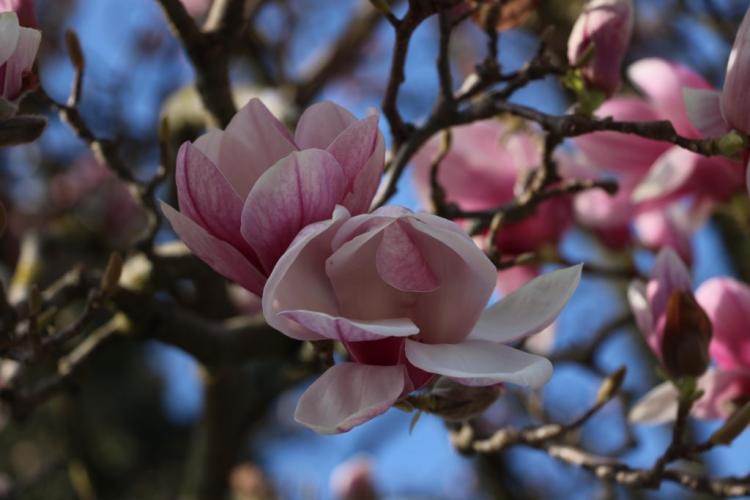 The magnolia impresses with its exceptionally beautiful flowers. Here you can find out everything about the flowering period and what to do if it does not bloom. Nobody escapes the magic of the blossoms of the magnolia ( Magnolia ) so quickly. The abundantly flowering trees bring spring not only to the garden but also… 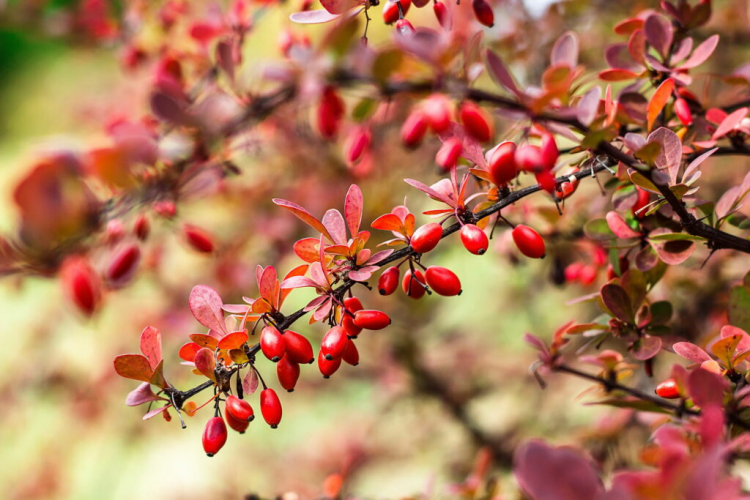 The beautiful wood with high ornamental value is very popular as a hedge. Here you can find out what to consider when planting and caring for barberries. Barberries, which are also called sour thorns because of their sour berries and belong to the barberry family ( Berberidaceae ), adorn their surroundings with colorful fruits and… 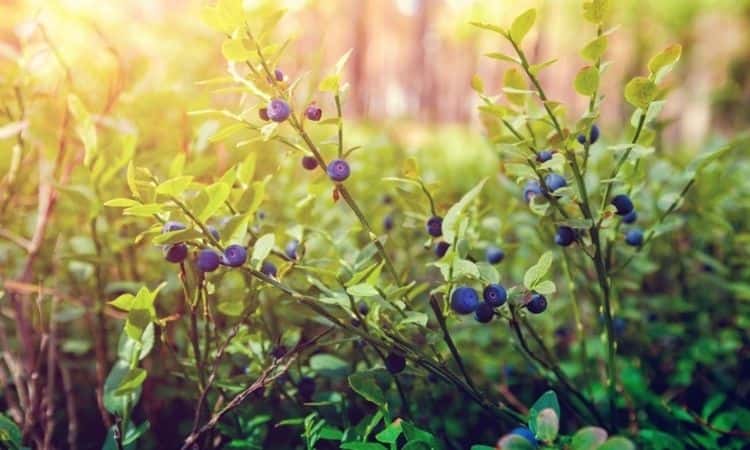 The varieties of blueberry are more diverse than one might think. We introduce you to the most aromatic and productive varieties. Blueberries (Vaccinium) – could only be collected with difficulty in the forest for a long time. But since the cultivated blueberries, the delicious fruits can also be grown in your own garden. While the…