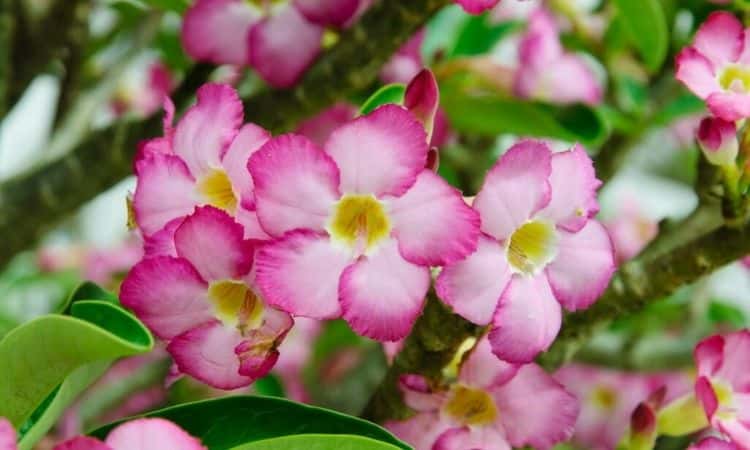 Succulents are valued mainly for their easy-care and robust nature. But did you know that there are also succulents with flowers? We present you with the most beautiful flowering succulents in a variety of colors.

Succulents can be found in almost every household and are probably one of the most popular houseplants of all. No wonder, after all, the survival artists are considered to be extremely hardy and easy to care for, which is why they are also well suited for beginners. But despite their great popularity, only a fraction of succulent species are known. Often when we hear the word “succulents” we think only of classics such as the money tree (Crassula ovata) or the aloe vera.

Yet there are numerous other species that are perfect as houseplants. Flowering succulents are an enrichment for every household because they combine a low-maintenance species with an extremely decorative flower. Which succulents with flowers are suitable for home or garden and what you need to consider when caring for them, we tell you below.

Succulents in bloom quickly attract all eyes and enrich any home. The following five flowering succulent species are especially beautiful as houseplants:

When talking about flowering succulents, you can’t forget about the Flaming Cheetah (Kalanchoe blossfeldiana). The bright red flowers of the succulent turn the houseplant into a real eye-catcher. If, on the other hand, you prefer something more discreet, you can also find succulents with pink, white, or yellow flowers with other Kalanchoe species such as the Madagascar bell (Kalanchoe miniata) or the brood leaf (Kalanchoe tubiflora). 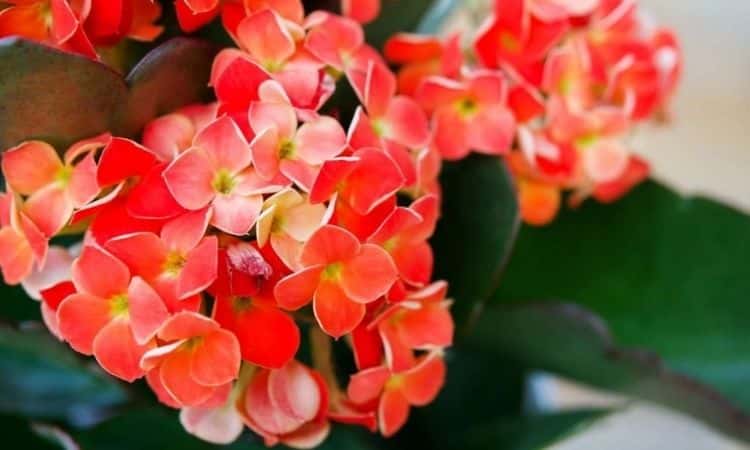 Echeveria (Echeveria agavoides) is one of the most famous succulents because it is considered to be extremely hardy and long-lived. In fact, however, few people know that the echeveria is also a succulent that flowers. On flower stalks up to three inches long, small flowers can appear from March to June, often pink to yellowish orange-red. 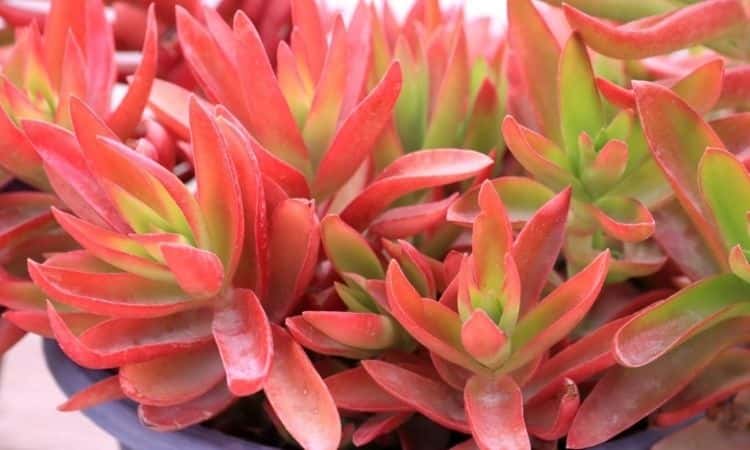 The desert rose (Adenium obesum) is still one of the real insider tips in the USA when it comes to flowering succulents. Especially its caudex, which can often take on bizarre shapes, makes the plant an eye-catcher. However, the succulent only achieves its full beauty when in bloom – the strikingly beautiful pink flowers of the succulent are actually reminiscent of wild roses. However, in addition to the common simple pink flowers, the desert rose also shines in pure white, intense red, or dark purple. 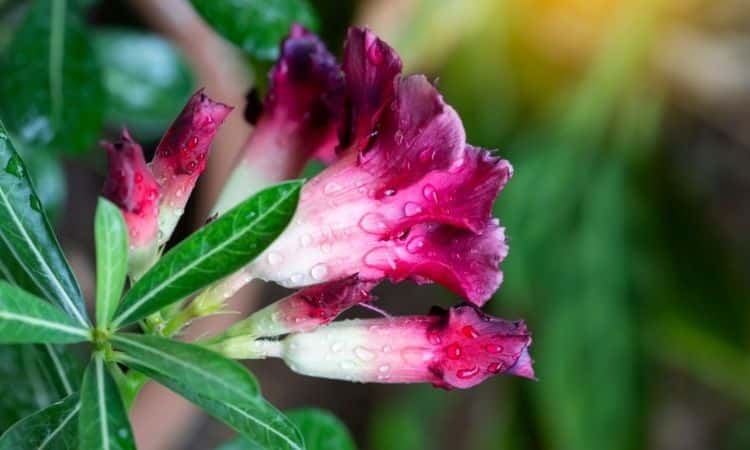 Christ thorn (Euphorbia milii) is a popular houseplant because the plant’s red, pink or white bracts are very decorative. The actual flowering of the succulent is admittedly somewhat inconspicuous with the small yellowish flowers – however, in combination with the opulent bracts, the succulent is beautiful to look at when in bloom. 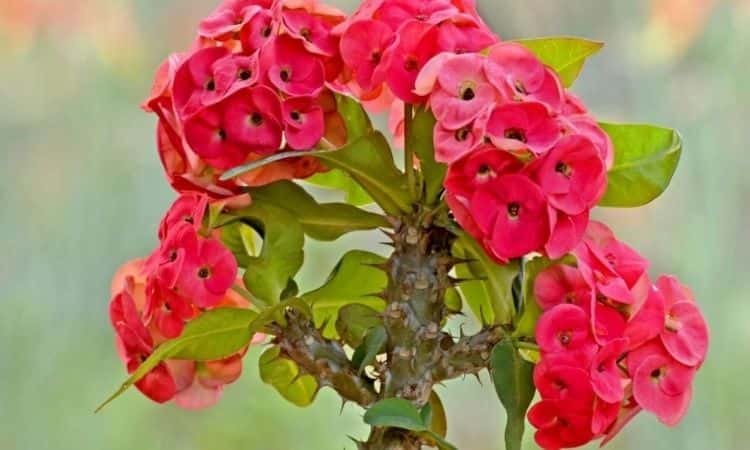 Admittedly, Conophytum calculus is already an unusual sight with its roundish, gray, or light green body. But once this unusual succulent blooms, no one can escape its sight. The single orange-yellow flower of the plant opens only at night and has a pleasant aroma reminiscent of cloves – a unique spectacle. 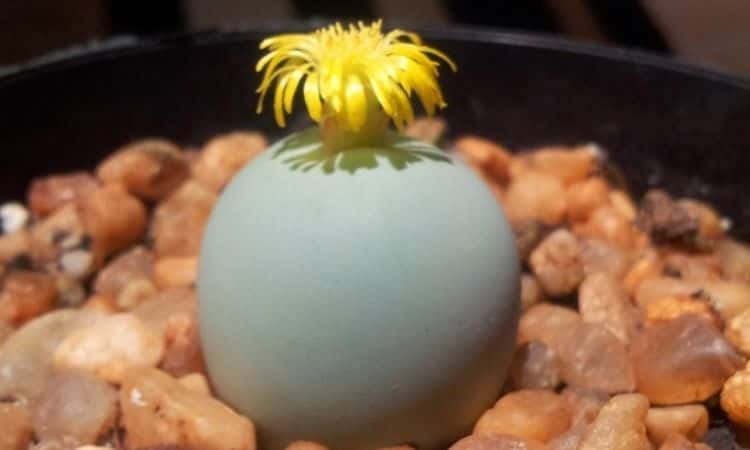 Read More: The 10 Most Beautiful Summer Flowers For The Garden
If you’re looking for a succulent with a yellow flower, you’ve come to the right place with the Sharp Wall Pepper (Sedum acre). From June to July, the plant charms with an abundance of small, bright yellow flowers. In full sun, dry location, the flowering succulent shows its best side and is also considered extremely hardy, which is why it is often used for rock gardens. 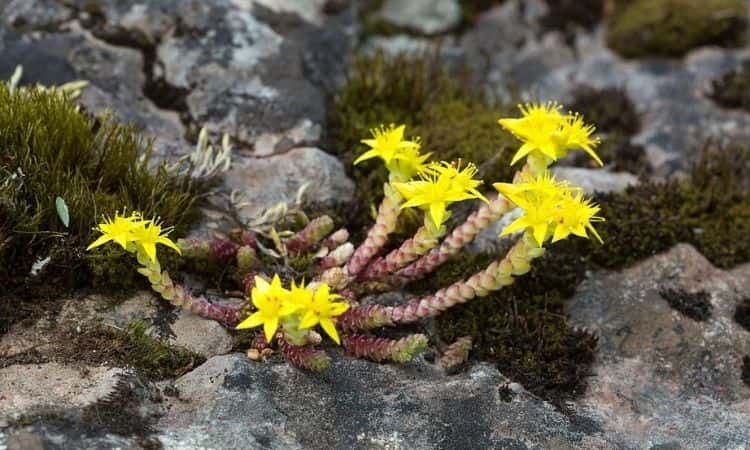 The garden yucca (Yucca filamentosa) bears its name rightly because the flowering succulent is winter-hardy and can thus be planted in the garden without any problems. Starting in June, the plant shows its flower shafts, which grow up to two meters high and bear great white bell flowers in midsummer. Unfortunately, the succulent often presents its white flowers only two to three years after planting – but the wait is worth it because there is hardly any succulent that blooms more beautifully. 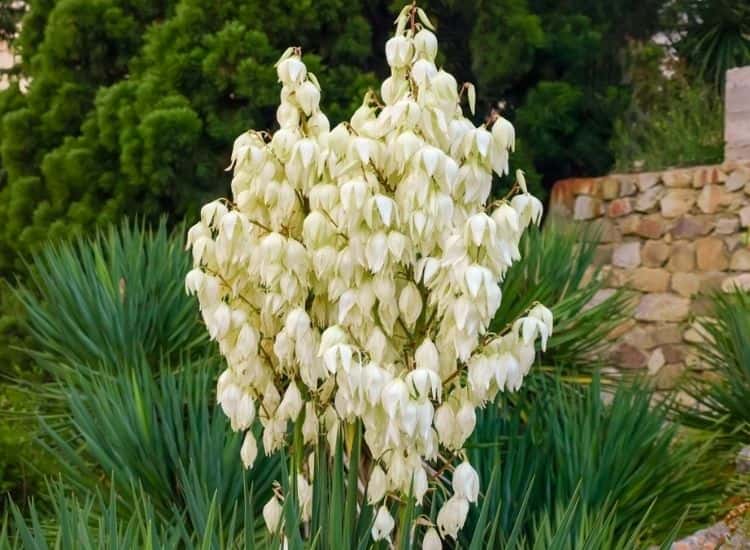 Midday flowers (Delosperma) are a real feast for the eyes with their colorful blossoms. Unfortunately, many species are not hardy and therefore not suitable for the garden.

Fortunately, those who still do not want to do without the succulent flower can resort to some hardy varieties. For example, ‘Golden Nugget’ or ‘Fire Spinner’, which enchants with its orange-pink flowers, have proven themselves. 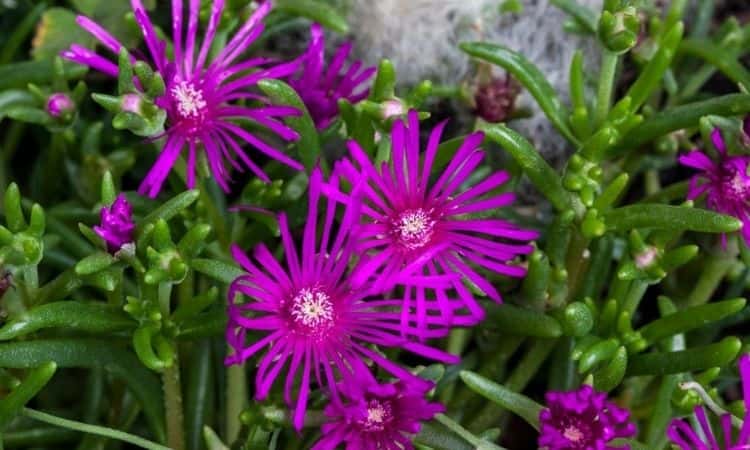 The houseleek (Sempervivum) belongs to the classics of succulents can be found in many gardens. With its perennial nature and decorative leaf rosettes, it is at the same time one of the hardest, but also most decorative plants in the garden.

But few know that the succulent also flowers. Especially the mountain houseleek (Sempervivum montanum) convinces with its striking red flowers. 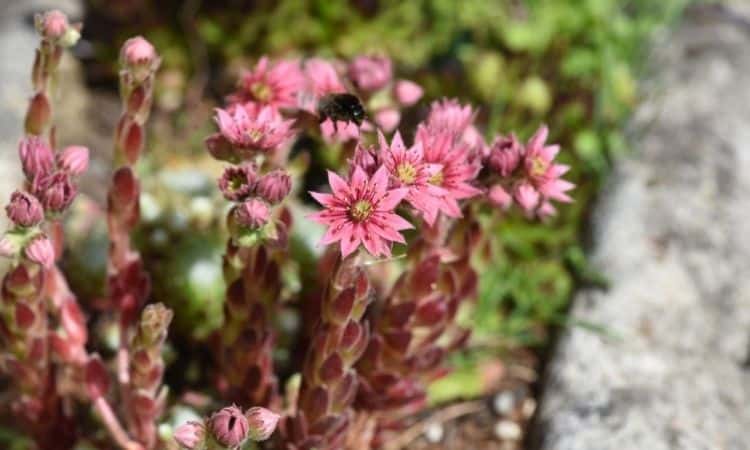 From June to August, the white stonecrop (Sedum album) attracts all attention with its flowers. The white blossom of the succulent not only magically attracts the eyes of people – bees and butterflies are also attracted by the flowering succulent. But the white stonecrop is not only decorative – but it is also considered to be extremely robust and hardy. 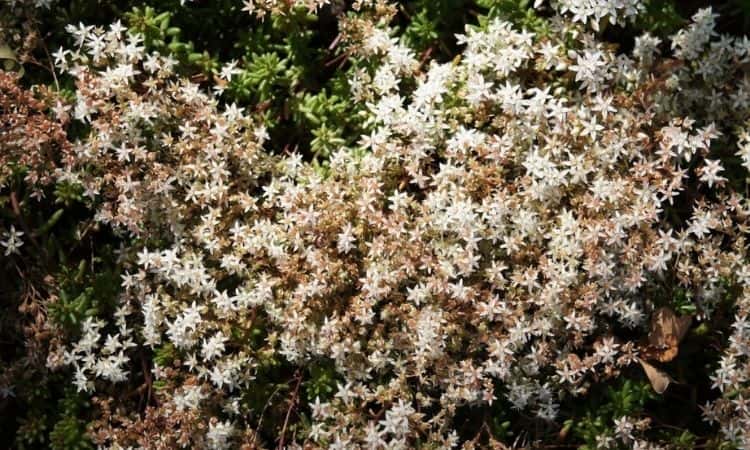 Should you cut the flowers off succulents?

Once the succulent has faded, many gardeners wonder if they should cut off the old flower. This is not an easy question to answer: basically, the old flower cannot be removed from the succulent immediately, as it slowly extracts all the nutrients and substances it can reuse from the faded part of the plant.

Once the flower stalk dries out and becomes brittle, the flowers often fall off on their own or can be carefully cut off with a knife. However, withering also increases the risk that the flower will begin to rot – if this happens, or if you don’t like the look of the wilted parts of the plant, you can also remove them with a sharp, clean knife without harming the plant.

For a succulent to bloom, it needs, above all, ideal conditions and good care. Fortunately, this is not particularly complex, if you follow a few basic rules. For example, the right substrate is essential for succulents, because it forms the basis for their growth. Succulents have special requirements: the substrate should be loose and have good drainage because even flowering succulents are sensitive to waterlogging.

As a continuation of this article, you can learn – Can You Grow Carnivorous Plants In The Garden, from this article.

A dry stone wall in the garden is not only decorative but also provides an important habitat for beneficial insects. Here you can find out what you should consider when planting a dry stone wall. Dry stone and natural stone walls have a long tradition in garden design: In the past, they were used in… 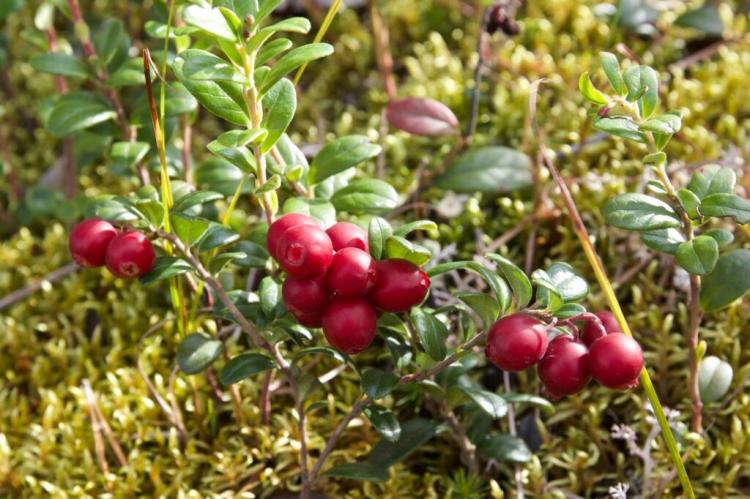 82 / 100 Powered by Rank Math SEO Lingonberries are known as a healthy snack and delicious side dish in the kitchen. How to grow a plant yourself, what to look for when harvesting, and what the fruits can be used for, learn from this article. Lingonberries are one of the relatively unknown berry bushes,… 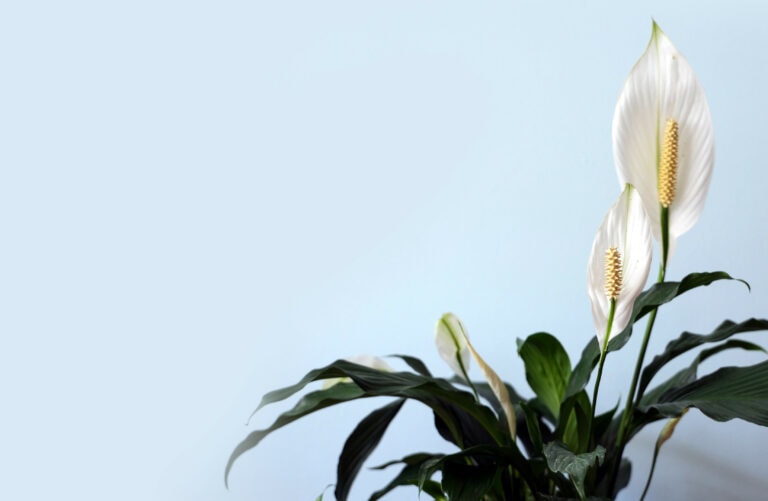 75 / 100 Powered by Rank Math SEO Peace Lilies(Spathiphyllum) are popular houseplants that are known for their attractive, glossy green leaves and white, spatula-shaped flowers. While they typically grow best in soil, it is possible to grow Peace Lilies in water. How long can a peace lily live in water? Peace Lilies grow just… 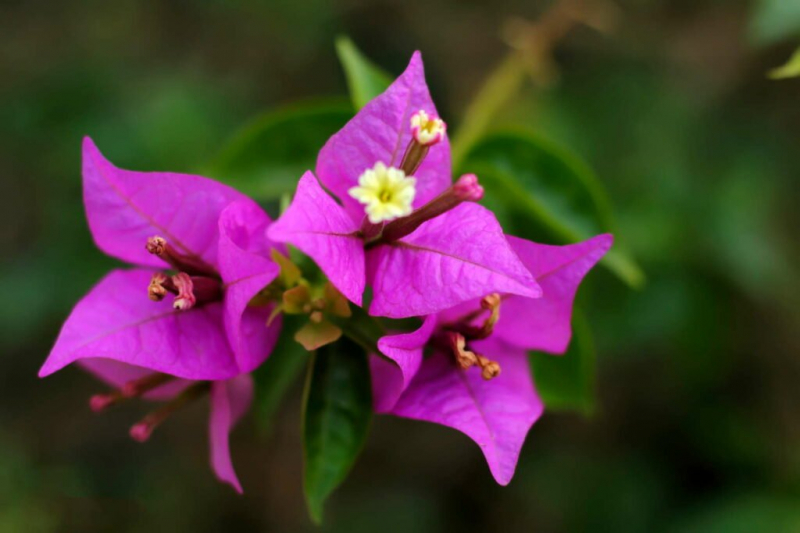 Bougainvilleas shine impressively when they are in full bloom. You can find important tips about buying and caring for bougainvillea here. Bougainvilleas ( Bougainvillea ) are not only known as a splendid and decorative plant in warmer countries but are also enjoying growing popularity in this country. The exotic flower, which botanically belongs to the… 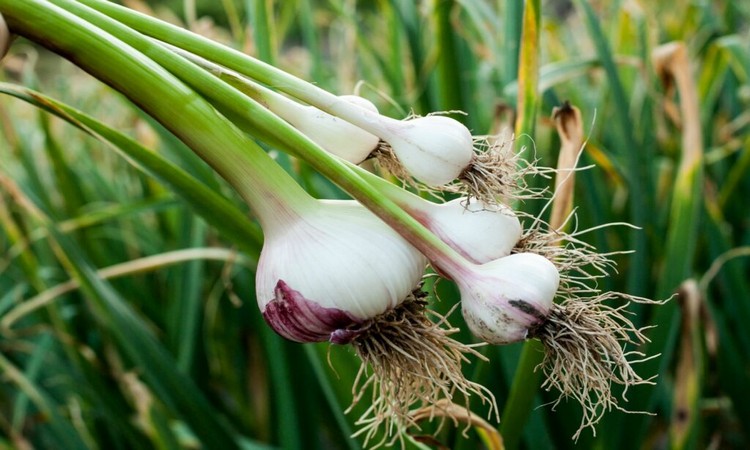 Planting garlic in your own garden – with these instructions you will succeed step by step from staking to harvesting. It is impossible to imagine the kitchen without it and is considered an absolute must in most countries of the world! Garlic (Allium sativum) originates from Asia and is very popular worldwide as a spice… 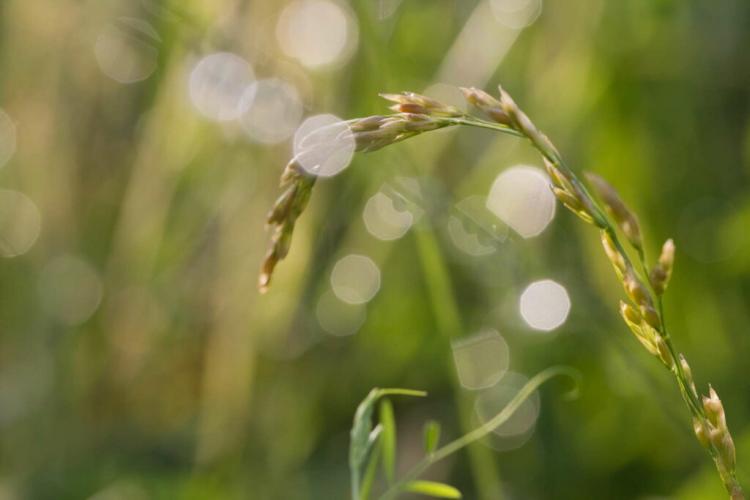