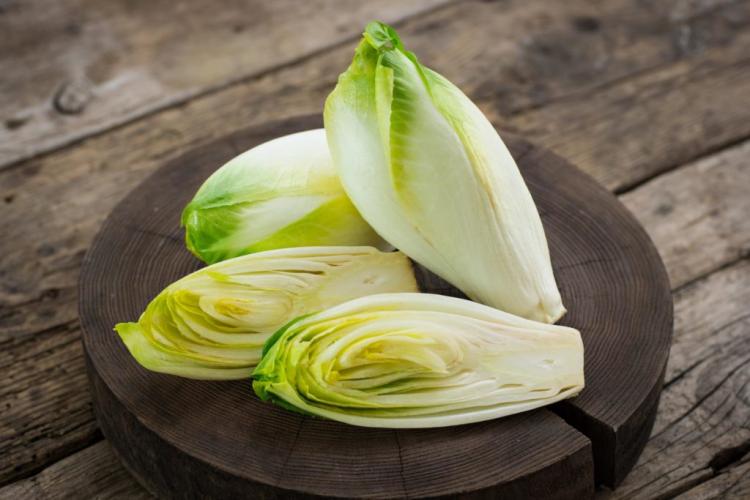 The bitter winter salad is extremely healthy. Here you can find out what to consider when growing and harvesting chicory.

If you want to grow chicory yourself, you need a little patience. Because the delicious bud is not already formed in the vegetable patch, but only after the roots have been harvested in autumn and then sprouted again in the dark. Find out below how this works and why perseverance is worthwhile.

Chicory ( Cichorium intybus var. Foliosum ) is leaf chicory and belongs to the sunflower family. The roots of the wild chicory ( C. intybus ) were already used as a vegetable and medicinal plant in ancient times. During the 18th century, the root chicory ( C. intybus var. Sativum ) was bred and cultivated in Europe to use roasted as a coffee substitute due to its bitter aroma.

Origin and characteristics of chicory

How exactly the chicory we know today came about is still unclear. One version says that around 1845 the head gardener Brézier of the botanical garden in Brussels discovered that the chicory roots stored in the dark cellar had sprouted fine, pale yellow leaf sprouts. These turned out to be extremely tasty and thus the variety ‘Brussels Witloof’ was born. What is certain is that the chicory we know today was bred from the root chicory. This is still very popular, especially in Belgium, France, and the Netherlands, but in Germany, it is less and less on the plate, although the vegetables are not only easily digestible but also very healthy. 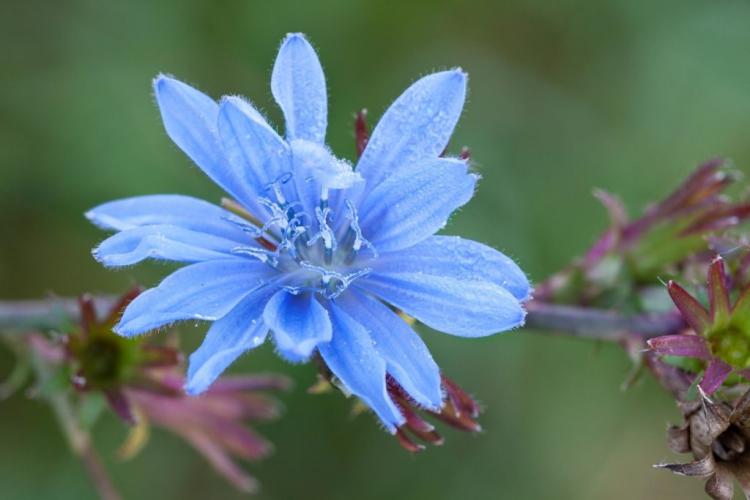 The biennial plant forms roots over the summer that are approximately 15 centimeters long and three to six centimeters thick. Over the winter, in complete darkness and at low temperatures, these form a cone-shaped bud. In the second year, the plant forms an inflorescence that is up to 1.5 meters high and has multiple branches.

The different types of chicory differ mainly in the time of harvest, in their color, and in whether they need a top layer for forcing or not. The top layer is a layer of earth or sand that covers the roots after harvest and provides space for the shoots. 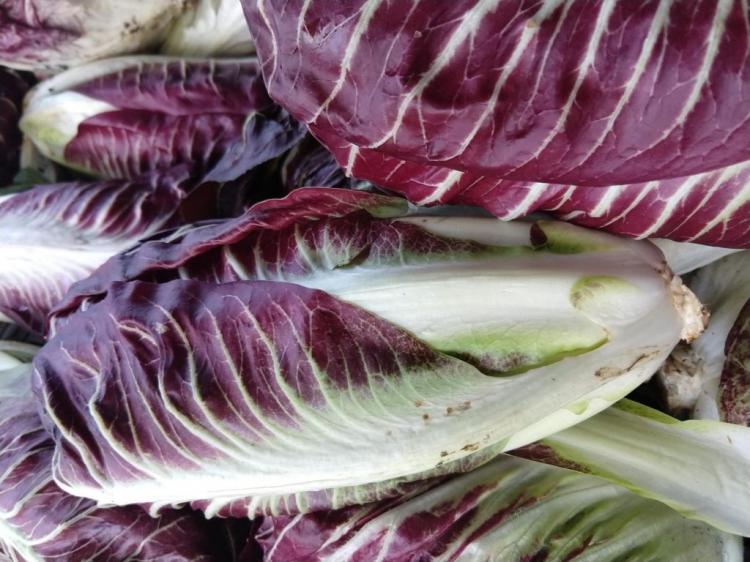 Buying chicory: what you should pay attention to

Chicory is sown directly in the field, which is why only the seeds have to be bought. This can be found in hardware stores, garden centers, or on the Internet. If you want to propagate your chicory yourself, you should make sure that you acquire solid seeds. You can find tips on propagation further down in the article.

The cultivation of chicory can be roughly divided into two steps: In spring, the plants are grown outdoors, and, over the winter, the roots are forged in the cellar. Forcing is understood to mean that after a period of rest, you get the root to sprout again. This takes place in complete darkness and at temperatures of 12 to 18 ° C. Today the water forcing is mainly practiced. The roots are immersed in a nutrient solution. However, this method is less suitable for growing at home. A suitable option for growing your own winter lettuce is to grow it in a container in the basement. You will learn exactly how this works in the next section.

The right location for chicory

A sunny location with sandy, humus soil is particularly suitable for the plants to thrive and form strong roots. This should be moderately rich in nutrients, too much nitrogen primarily promotes the leaf mass, which is at the expense of the roots and makes them less capable of growing. So that the roots can develop well, it is important that the soil is deep, stone-free, and has no compaction. The pH value should ideally be between 6.5 and 7.5. You should also plan a cultivation break of at least four years in the crop rotation.

How to grow chicory

The best way to explain the cultivation of chicory is to divide it into two steps: sowing and force.

Chicory is a winter vegetable that is sown in spring. From mid-May, at the earliest at the end of April, the seeds are sown at a row spacing of 30 to 40 centimeters and slightly thinner than carrots. The sowing depth should be between two to three centimeters. About four weeks after sowing, the plants are separated in the row at a distance of ten centimeters.

Note: If the seeds are sown too early or the plants have too much space to stand, the roots can become too big. The roots can be shortened for forcing, but they often form many small side buds.

After 18 to 20 weeks outdoors, around mid-September to October, the roots can be carefully harvested with a digging fork, for example. The foliage is cut five centimeters above the root and trimmed if necessary. Until the forcing begins, the roots are pounded into damp sand and stored in a cool place for the resting phase – as is the case with other root vegetables. 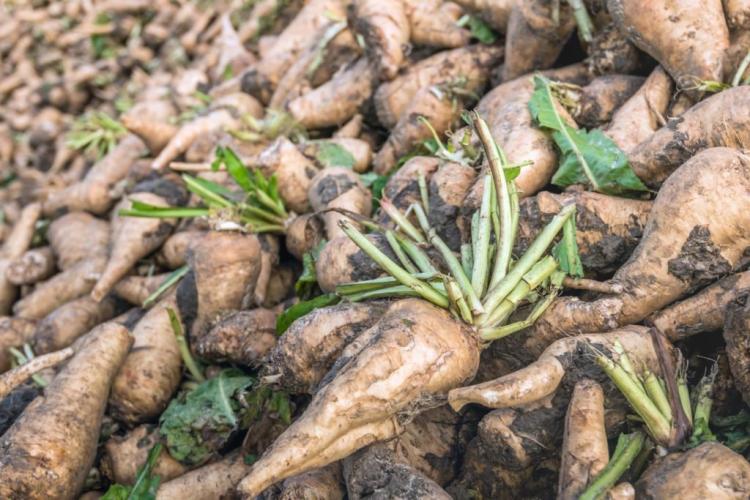 To form beautiful buds, the roots should have the following properties:

How do you go about sowing chicory?

After the rest phase, the forcing follows, usually from December. This requires temperatures between 12 and 18 ° C and complete darkness. When the light comes to the plants, the leaves turn green and bitter. Depending on the variety, forcing takes place with a top layer, for example, a ten-centimeter thick layer of sand or earth, or without a top layer, for example with an opaque film. Older varieties in particular, such as the ‘Brussels Witloof’, need a top layer for forcing, whereas newer varieties such as ‘Tardivo’ or ‘Robin’ do not.

One possibility for your own forcing in the basement is to plant the roots in a container such as an old saucepan, bucket, or plastic box. To do this, the roots are placed close together vertically in the container and this is filled with soil. This should not be moist but should be poured thoroughly with warm water when it is brought in to give the roots the impulse to sprout. It is important that a sufficient dark cavity is created above the vessel for the winter lettuce to grow into, and that the shoot shoots do not get wet when filling with water. After three to five weeks, the chicory is ready and can be harvested. 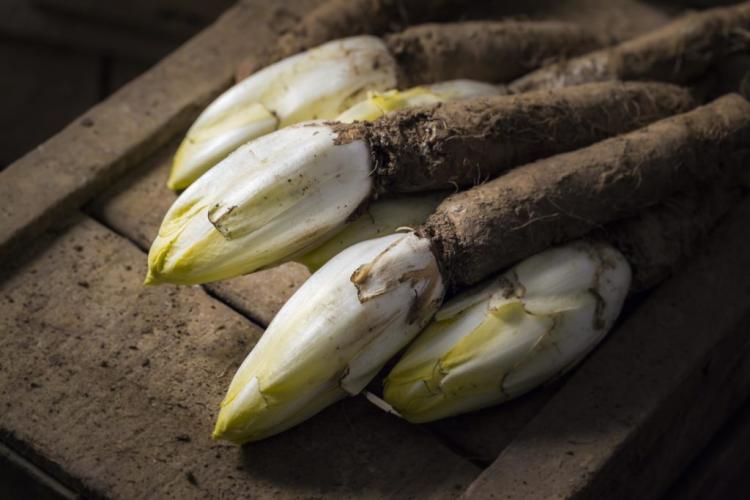 How is chicory forcing done?

Chicory is low to medium eater. It does not tolerate fresh manure on the bed well, but you can work in compost or a fertilizer with organic long-term effects before planting. This completely animal-free fertilizer supplies the plant with the most important nutrients throughout the entire vegetation period.

To ensure that the plants emerge evenly and well, care should be taken to ensure that the soil moisture remains constant. The seedlings, in particular, are prone to dehydration, so don’t forget to water them regularly when it is dry. Not many maintenance measures are required when growing the roots. However, regular hoeing to loosen the soil and keep the weeds out pays off.

If you want to produce your seeds yourself, you should use the roots that have formed particularly beautiful heads. In the second year, the plant forms a branched inflorescence up to 1.5 meters high with pretty, blue flowers. In autumn, the ripe seeds can then be harvested for rebuilding. Make sure that you do not use so-called F1 varieties for propagation. F1 varieties denote hybrid varieties that do not pass on their properties and therefore cannot be reproduced.

Tip: In order to be able to maintain the characteristics of the variety, no chicory or wild chicory should bloom within a radius of 500 meters.

The winter lettuce can be harvested after about a month. This has now formed solid shoots above the root and can be cut off at the root attachment. Each root can only be harvested once. The salad should be stored completely dark at 3 to 6 ° C, preferably in the vegetable compartment of your refrigerator. After a week at the latest, the delicious vegetables should be processed.

Ingredients and uses of chicory

Whether steamed, fried, raw or prepared as a casserole – chicory should not be missing in any healthy kitchen. Especially as a crunchy raw food in winter, it is hard to beat. Bitter substances are responsible for the unmistakable, slightly bitter taste, especially inhibin. This secondary ingredient stimulates the formation of bile acids, which have a positive effect on our intestines. In addition to bitter substances, chicory also scores with numerous vitamins and fiber. If you want to soften the typical taste of chicory, you can counteract the bitter note in a salad dressing with honey. 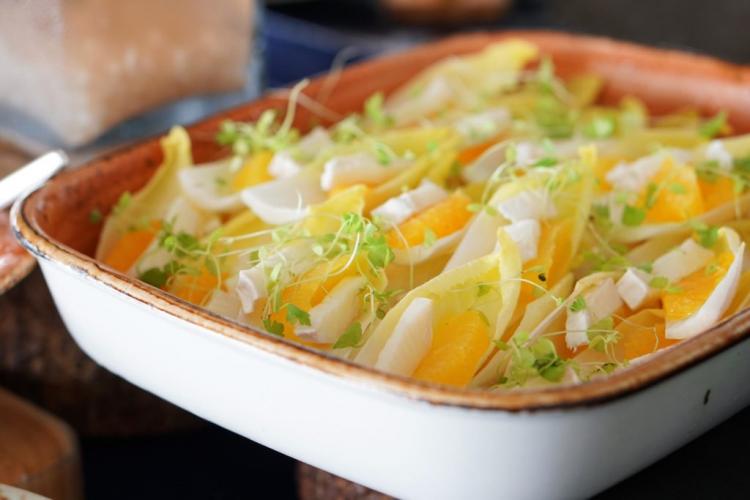 Tip: If you want to know how chicory tastes like a coffee substitute, you can take a look around the supermarket, because even today you can still find proportions of chicory in coffee substitute products. 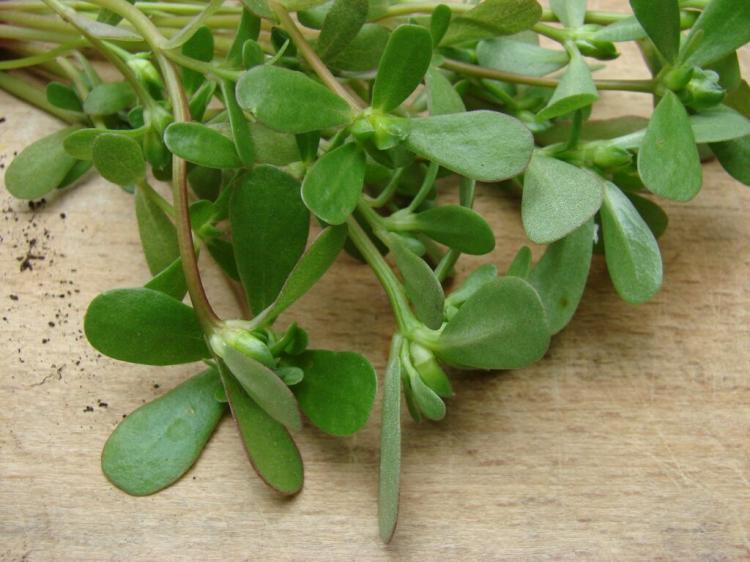 12 / 100 Powered by Rank Math SEO The healthy herb is all the rage and is on the rise. Find out where to buy purslane and what to look out for here. Purslane ( Portulaca oleracea ) is an old leaf vegetable. Even the ancient Egyptians are said to have appreciated it. It is… 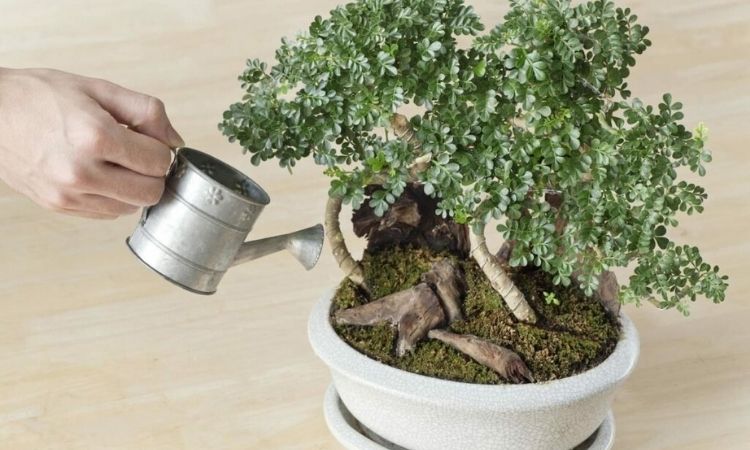 For the bonsai to thrive, the right watering is crucial. Here you can learn what you should pay attention to when watering bonsai. Due to the shell culture, there is hardly any room for error when caring for a bonsai. Watering in particular can quickly become a source of error here. This is because the… 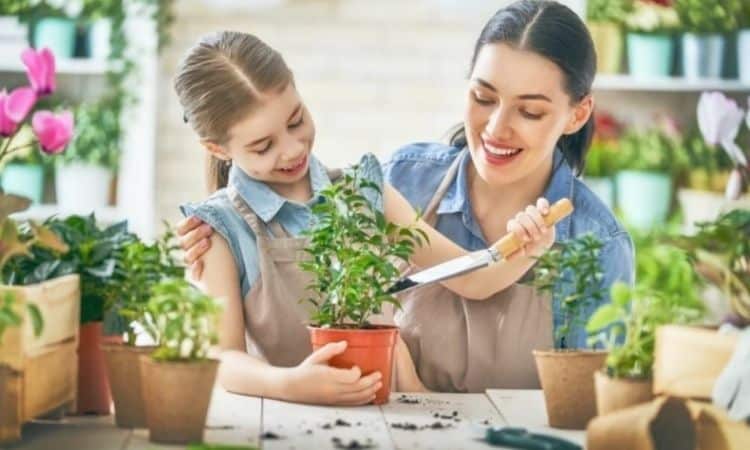 Children have great fun gardening. But what to do if you don’t have a garden or the weather doesn’t allow you to go out? We give valuable tips. Even if you do not have a garden at your regular disposal, you need not despair. There are great ways to get children excited about gardening –… 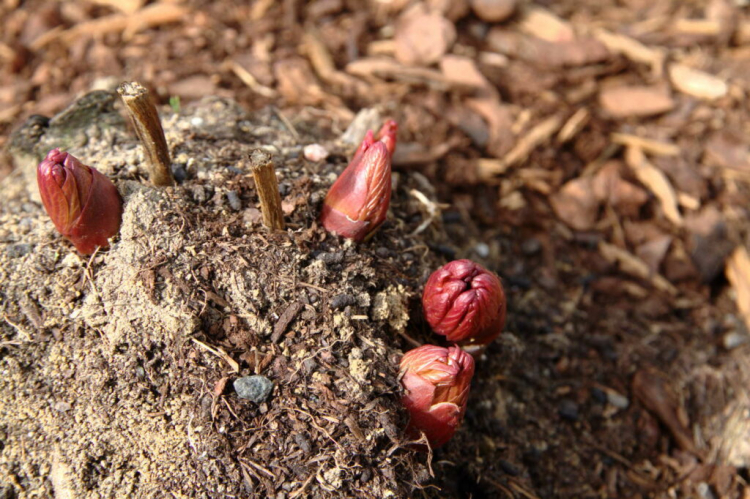 You can’t really have enough peonies. Here you can find out what multiplication options are available for the dividing peonies. Peonies ( Paeonia ) can be found in many gardens and enchants with their flowers. When it comes to propagating the peonies, there are several options. One possible variant is vegetative propagation, such as dividing… 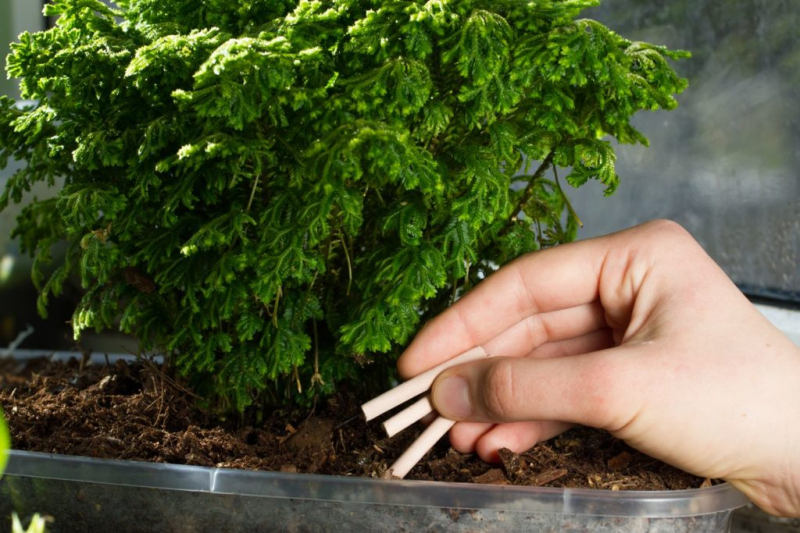 Fertilizer sticks are easy to use and promise sustainable and safe fertilization. We take a close look at which promises they keep. Gardening life can be so simple: Put your chopsticks in, put water on them, done. One could summarize the manufacturer’s application of fertilizer sticks like this or something like that. You should already… 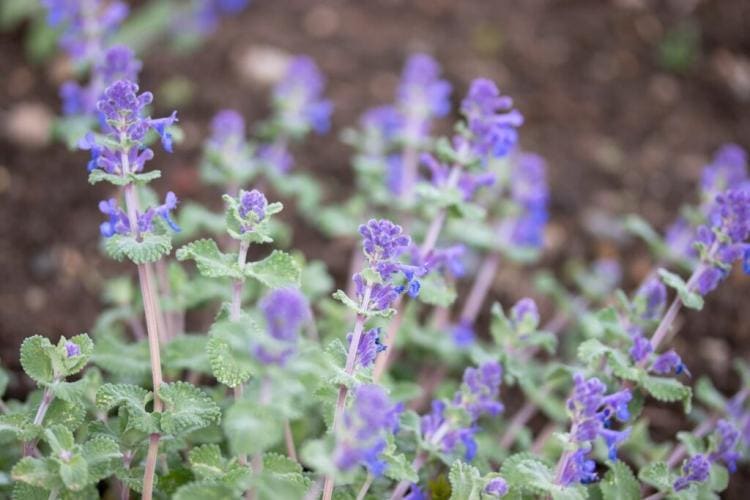 Catnip is not only popular with house cats. We reveal what you need to know about planting catnip in the garden or as a houseplant. Catnip ( Nepeta ) is a real wonder herb. It has a very special effect on cats and people can use the fragrant plant as a medicinal herb or as…