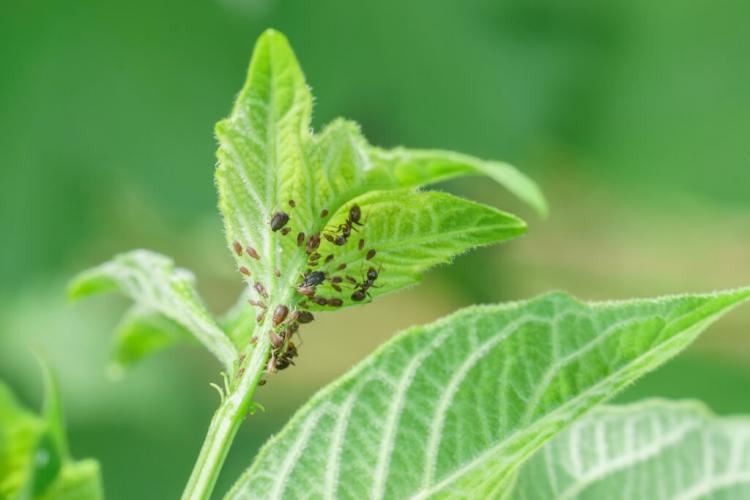 Where do aphids come from? What do aphids look like and how do I recognize an infestation? In our profile, you can find out everything about the different types of aphids.

Usually one speaks of “the aphid”, we know about 3000 species of which 850 species occur in Central Europe. They not only differ in their coloration but also prefer different host plants. As a result, aphids can attack pretty much any plant. Everything you need to know about the most famous plant pests can be found here.

Aphids belong together with leaf fleas (Psylloidea), scale insects (Coccoidea), and the whitefly (Aleyrodoidea), better known as whitefly, to the plant lice (Sternorrhyncha).
The small insects are only a few millimeters in size and vary in color depending on the species. Most aphids are green, black, or reddish in color. The lice are mostly wingless, but winged individuals are also found for spreading purposes.

Aphids ( Aphidoidea ) feed exclusively on plant sap and cannot attack animals or humans. To get to the sap, the aphids have a proboscis. Most of the plant-sucking lice are so-called phloem suckers. The phloem is a conductive tissue in plants in which the particularly sugary juice is transported. Because the aphids also need other nutrients such as protein, they have to take in an extremely large amount of the sap, as there are hardly any proteins in it. Most of the sugar is therefore excreted as honeydew. In addition to ants and mushrooms, beekeepers also enjoy honeydew – this is how the famous forest honey is made.

In addition to food intake, the aphids’ way of life is also very interesting. Many aphid species alternate between winter and summer hosts. The winter host often only serves as protection for the next generation of aphids. Most of the time, only the aphid eggs survive the winter. However, if the temperatures remain mild over the cold season, even adult aphids can survive. After such a mild winter, real aphid infestations can occur on beans, peas, and other herbaceous plants in early spring. The aphids then start looking for their summer host in spring. Many aphid species still have wings at this point so that longer distances can be covered.

Once a host has been found, the way of life often changes. There is a generation change and wingless females are formed that are capable of virgin generation. This type of reproduction enables very rapid reproduction. This is usually the time when aphids become a problem for the hobby gardener. Due to the high progeny, the aphids can severely weaken and damage plants. When the food source is exhausted, winged females have formed again, which infect plants again. In autumn, the females lay fertilized eggs that last through winter and from which a new generation of aphids hatch in the next spring.

Tip: Whether plants suffer badly from aphids or not also depends on fertilization. A nitrogen-rich, mineral fertilization more easily leads to susceptible plants with soft tissues that make it easy for aphids. The organic and potassium-heavy fertilization, for example with one of our Gardender organic fertilizers, ensures balanced growth with strong cell walls, which offers more resistance to the stinging bristles of the plant lice.

Where do aphids come from?

Aphids are not only annoying pests, they are also often worn unconsciously as amber pendants. The animals trapped in the amber show that the pests have been around for over 200 million years. Aphids are common around the world and have adapted to a wide variety of conditions. In the Middle Ages, it was believed that aphid infestation was caused by a special kind of rain, the “nephew rain”. Today we know that there are winged individuals who can fly quickly from plant to plant. But where do the aphids come from in our garden?

Since aphids lay their eggs on specific winter hosts in autumn, depending on the species, the animals hatched from them start their search for a summer host in spring. For example, the black bean louse ( Aphis fabae ) likes to overwinter on euonymus europaeus or the common snowball ( Viburnum opulus ), whereas the green peach aphid (Mycus persicae ) overwinters on sloes ( Prunus spinosa ) or peach trees ( Prunus persica ). For this reason, it can help not to plant such winter hosts in your own garden.

Among the hundreds of different aphid species, there are a few that are particularly common in our home gardens.

The pea aphid is a fairly large species of aphid, two to four millimeters in length, which, as the name suggests, particularly likes to attack legumes such as peas. It usually only forms small colonies and prefers to attack young shoot tips and flowers as well as the pods of peas and other butterflies (Fabaceae). The infected shoots and legumes often wither, contain fewer seeds and the yield can drop significantly. This species shows no change of host and lays its eggs in autumn for wintering on hardy butterflies.

By the way, research is very interested in this plant pest. The lice come in different colors, such as yellow, green, and red, but have the same genetic make-up. How these different colors come about is a current research question.

With a maximum size of two millimeters, this is a smaller representative of the aphids. The flightless lice are colored green, while the flight able generation is black-brown to black. As the name suggests, they overwinter on a peach tree or sloes. The summer hosts also include potatoes and other herbaceous plants. The infestation by the green peach aphid is mainly visible through rolled-up and yellowed leaves. When they suckle on various plants, the lice transmit viruses that can damage your plants, even after the aphids have disappeared.

This aphid species is a matt black, sometimes dark green, aphid approx. Two millimeters in size. They overwinter exclusively on the euonymus ( Euonymus europaeus ) or the common snowball ( Viburnum opulus ). From there, from spring onwards, they attack herbaceous plants such as field beans, potatoes, and beets. Here, too, the leaves often roll up in the event of an infestation and viruses are transmitted. The colonies can become very large and therefore severely damage infected plants.

An infestation of a few aphids is not even noticed because they hide quite well under the leaves. Only when it comes to mass reproduction, countless little pests can be seen. They are then partly on the leaves and especially on the freshly formed flower buds and shoot tips. The usually two to three millimeters small plant teat can lead to deformed and curled leaves in the event of severe infestation.

Due to their suction activity, they locally extract a lot of water from the plant and shoot tips hang down. When aphids soak up the sugary plant sap, they always excrete a large part of the sugar in the form of honeydew. This increasingly attracts ants, which can be an indication of an aphid infestation. If the honeydew falls on the leaves below, a sticky layer forms there, which is also typical of aphids.

Due to the suction activity and thus the removal of sugar, proteins, and minerals, as well as the aphid saliva, infected plants are weakened, and fruits or leaves are deformed. This can reduce yield and quality, for example with tomatoes, peppers, lettuce, and cucumbers. Further damage to the plants can result from infection with viruses that are transmitted by the aphids.

If an aphid sucks on a virus-infected plant, the aphid will also ingest the virus. If the louse now changes the host plant and starts sucking on the new plant, the virus can be transmitted. This can happen if only a few animals are infected. Common symptoms of plant viruses are yellow-green, mosaic-like leaf discoloration. But don’t worry: plant viruses are not dangerous for us humans.

Black and sooty fungi can form on the leaves of the excreted honeydew. This means that the plant receives less light and is also weakened. A crop that is covered with these mushrooms should no longer be consumed.

What is the damage caused by aphids?

In the case of such damage, we recommend that you take biological measures as soon as possible to control the aphids. Biological pesticides based on neem oil are a natural and very effective way of getting rid of aphids. Our Gardender organic pest-free neem is based on this valuable oil. The herbal remedy ensures a quick stop of the lice’s sucking activity and can be easily used both outdoors and in the home. Before use, be sure to read the information on the enclosed leaflet.

Aphids are particularly common on roses in early summer. Here they can damage the flower buds so severely that the flowers are in danger. We’ll show you how to naturally control aphids on roses. 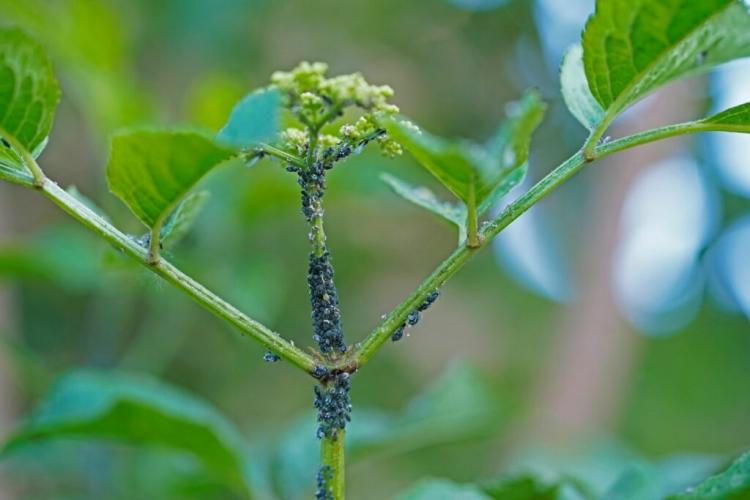 75 / 100 Powered by Rank Math SEO Will the black bean aphid affect your beans or ornamental plants? We explain how to prevent black lice and how to fight them successfully. Aphids can be found in almost every garden, the black bean louse being particularly common. But the bean louse cannot only infect beans… 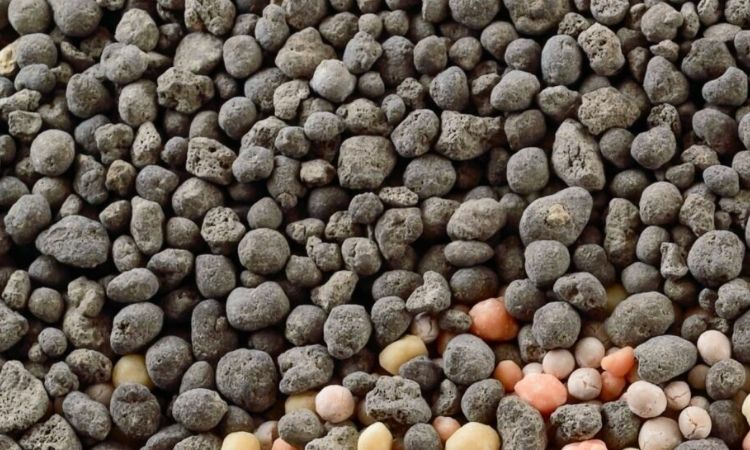 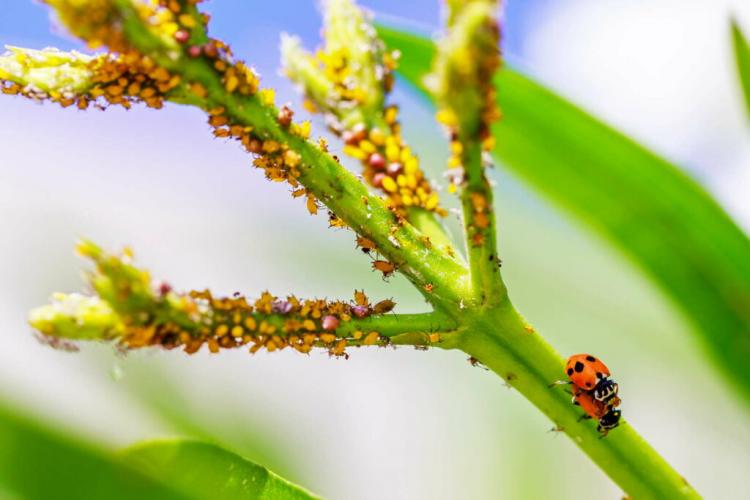 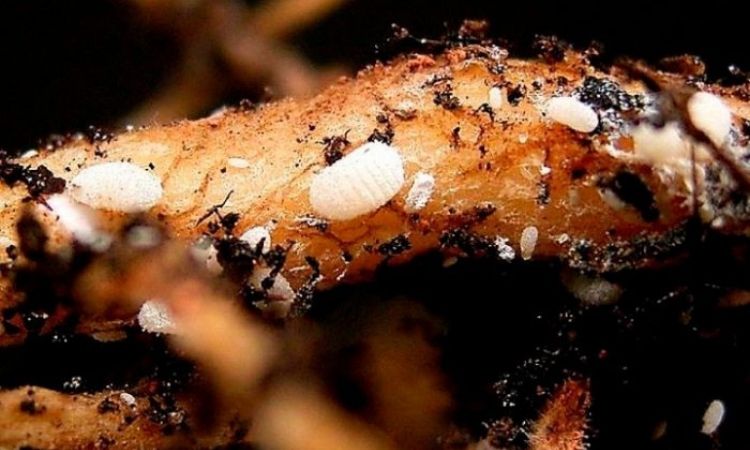 25 / 100 Powered by Rank Math SEO In recent years, scientists have found more than 100 species of rootworms. They belong to the genus Rhizoecus and the family Pseudococcidae. Root bugs are close relatives of mealybugs. However, a significant difference between them is their size: the length of an adult does not exceed 1.5-2.5… 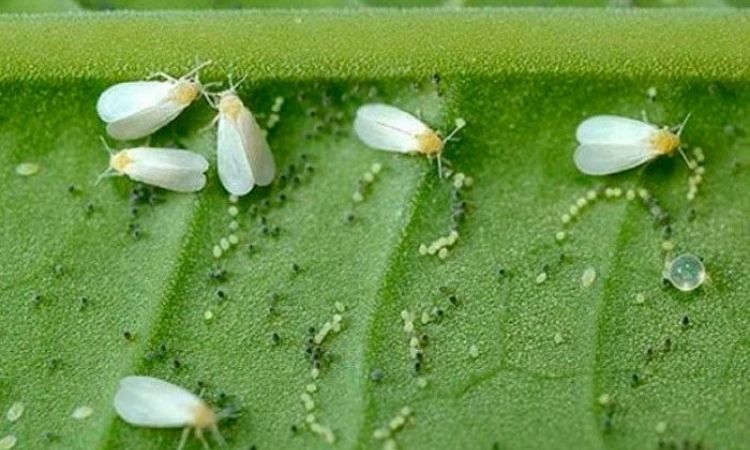 Aleurodids (Aleyrodidae), or whiteflies, are a family of small, equally winged insects, which unites more than one and a half thousand species. The scientific name of this family, derived from the Greek word, translates as “flour”, and this is due to the fact that there is a powdery coating on the surface of the wings… 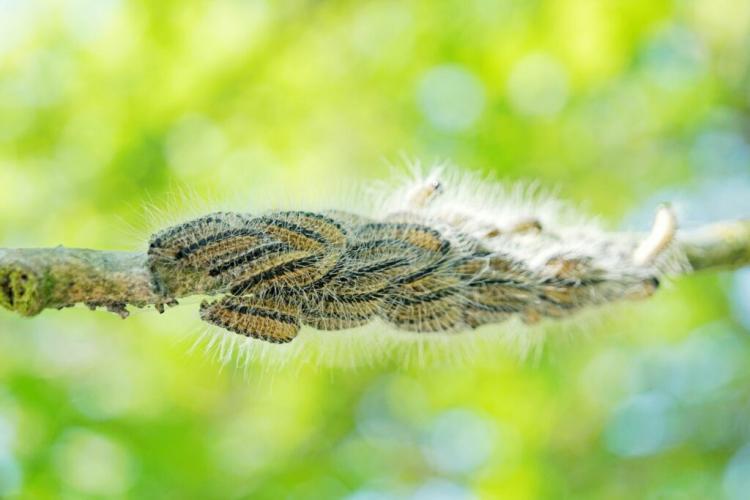